Muktar has faulted the court ruling that reinstated his former boss, saying that it came at a wrong time 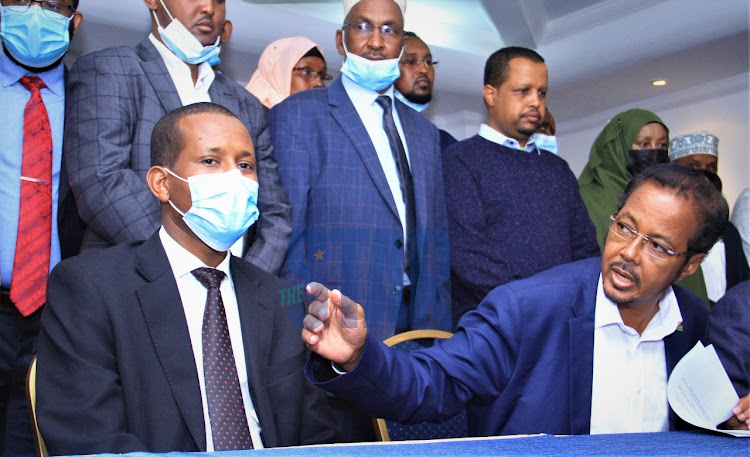 A cash crisis looms in Wajir after Controller of Budget Margaret Nyakang’o threatened to withhold funds as leadership wrangles escalate.

Nyakang’o said she has convened a crunch meeting with the county assembly speaker Ibrahim Yakub after reinstated Governor Mohamed Abdi wrote to her to stall the release of any funds.

Last week, the High Court reinstated Abdi who was impeached by the county assembly and the Senate in May last year for gross violation of the Constitution.

He was immediately replaced by his deputy Ahmed Muktar who was sworn in as governor in line with the Constitution and the County Governments Act.

“Abdi’s lawyer wrote saying we should withhold release of any funds until the old governor is fully in office, which is in order,” Nyakang’o told the Star on Monday.

The country’s budget boss said she wants to establish whether the current finance executive – signatory to the county’s accounts – is in office legally especially after the court reinstated the ex-county chief.

“We will withhold the funds. We will act depending on their speed of putting their accounting officer in order. We will agree jointly with the speaker on the timelines,” she said.

Nyakang’o said she hopes to speak with the speaker of the county assembly for some guidance. "He will tell me the latest,” she said.

The CoB said, ideally, her office should receive correspondence from the county assembly concerning the status of the county executives, as it is the body that vet and approves nominees.

“It is our role to decide whether the reasons that led to his impeachment have been legally resolved. What we are bothered about is whether we have the right signatories,” Nyakang’o added.

Yesterday, speaker Yakub confirmed the scheduled meeting without stating the exact date for the crunch meeting.

The CoB’s threat comes days after Abdi had asked the county treasury to freeze any expenditures pending the audit and handover.

Last weeks ruling threw the county into a leadership crisis as the two governors claim they are both legally in office.

Muktar made radical changes to Abdi’s cabinet, including the crucial finance docket, thereby changing signatories to the county’s bank accounts.

At the press conference held in Nairobi last week, Abdi held that the court confirmed the entire impeachment process was illegal.

He extended an olive branch to Muktar to work with him as his deputy.

“The landmark judgement issued yesterday will go a long way in guiding the county assemblies and the senate on how to properly conduct impeachment proceedings. They ought to avoid victimising governors through application of the law of jungle,” Abdi said.

He said the judges confirmed that the impeachment was not only unlawful but also unconstitutional.

"Consequently, I remain the governor of Wajir county. I extend hand to deputy governor Muktar and invite him to work with me as we did in 2017,” he added.

On Monday, Muktar faulted the court ruling that reinstated his former boss saying that it came at a wrong time.

Governor Muktar whose elevation as substantive governor was nulled said that the three-judge bench erred in reinstating the governor.

“I agree it came at the wrong time, the governor was impeached in April last year. It is almost a year down the line," he said.

Muktar said the ruling was delayed and he believes it did not come at the right time; when people were going for elections.

Two children and their mother got injured after a colonial bomb exploded last Monday.
Counties
9 months ago

Say terrorists are Kenya’s main enemy and should not be supported at any cost.
Counties
9 months ago