Some Garissa residents had complained of skewed identification and allocation

COMMUNITY INVOLVEMENT: Garissa county commissioner Boaz Cherutich in his office on Wednesday when he hosted a team from the World bank and government officials.
Image: STEPHEN ASTARIKO

The World Bank and state officials want communities involved for the success of the Kenya Development Response to Displacement Impacts Project.

KDRDIP is a national government initiative, supported by the World Bank to improve the lives of the refugee-hosting communities in the north of the country and is expected to be completed by April next year.

A section of residents had complained over skewed identification and procurement of the projects in their areas. In some instances, residents threatened and disrupted ongoing projects.

They complained of lack of involvement in the projects, with some alleging that the projects were forced on them without considering their priorities.

Garissa county commissioner Boaz Cherutich called for proper arbitration for the conflicts due to multiple interests of the communities.

He spoke during a meeting with World Bank and state officials on Wednesday.

“We have not had any major conflicts between the refugees and the host communities since this programme started and that is a good thing.

"However, I hope that there are consultations at the national level to bring back the county government who pulled out from this project because they are very key in ensuring the sustainability of the projects,” Cherutich said.

SUSTAINABILITY: Devolution CAS Abdul Bahari [L] and Garissa county commissioner Boaz Cherutich after a meeting with world bank officials who are in the county to tour some of the projects being undertaken by KDRDIP.
Image: STEPHEN ASTARIKO

While acknowledging the challenges, Devolution CAS Abdul Bahari said that while the project was by and large a success, the issue of public participation cannot be overstated.

However, the CAS said where there is a lot of money, conflicts are bound to arise from allocation and procurement of resources.

He said the government would wish to see the project succeed adding that the components captured by the project were dear to the communities especially during this drought season.

National KDRDIP’s coordinator Ann Kinyua said proper public participation was conducted and the few grievances reported arising from individuals who at first opposed the project or want more projects than what they settled for.

“A few people in these communities have not been satisfied with the projects we have done for them. They prioritised water projects but when they see a school or health facilities for other communities, they also demand the same,” she said.

“We don’t have the capacity to do everything for these communities and that is why we ask them to prioritise the projects that they want based on their needs,” Kinyua added.

Word Bank’s social development specialist Farida Hassan said individuals from the communities have been lodging complaints with the bank over the implementation of the projects.

“We have had some cases where people wrote directly to Geneva over the implementation of the KDRDIP projects. We have always listened and advised the communities," she said. 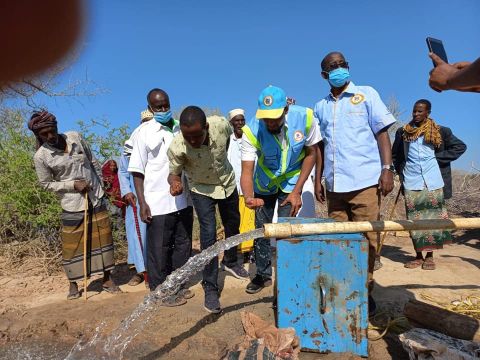 WATER PROJECTS: Officials from KDRDIP, leaders and residents of Madahgisi in Fafi constituency during the commissioning of a borehole done by KDRDIP in August.
Image: STEPHEN ASTARIKO