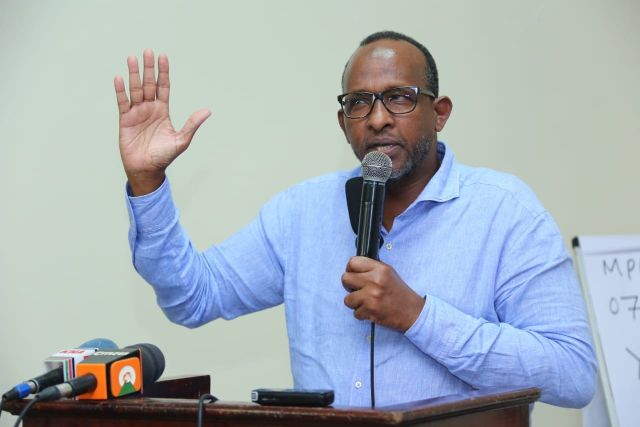 NO TIME TO WAIT: Garissa Township MP Aden Duale at a funds drive at a Garissa hotel.
Image: STEPHEN ASTARIKO.

Garissa Township MP Aden Duale has asked political parties to unite and salvage the BBI Bill through a parliamentary initiative.

The former National Assembly majority leader said on Thursday there's not enough time to wait for the Court of Appeal ruling, possibly a Supreme Court appeal and still hold a referendum before the 2022 General Elections.

He spoke when he joined political and community members for a fundraiser to help pay a medical bill.

Duale said he supports BBI as long as Northeastern counties do not lose constituencies.

“We don’t have a problem with BBI if we don’t lose Ijara and Wajir South constituencies," he said.

"I ask major political parties to unite because the Constitution allows for amendment by Parliament. Let the MPs pass the clauses that do not require a referendum as we wait for directions from the courts,” Duale said

Duale was among 83 MPs who voted against the BBI Bill in Parliament last month.

The BBI process was declared unconstitutional, null and void by the High Court.

On Wednesday Court of Appeal president Justice Daniel Musinga said he will constitute a seven-judge bench to hear the BBI appeal.

Justice Musinga is presiding in the case management conference on the BBI appeals. Other judges include Roseline Nambuye and Hannah Okwengu.