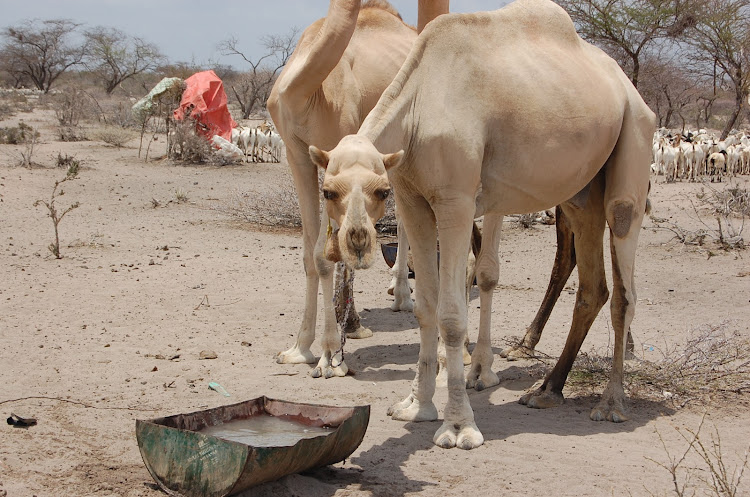 One of the most frustrating incidents for a pastoralist in Northern Kenya is watching helplessly as their precious livestock die one after the other because of drought or illness.

This has become a familiar occurrence for most of the pastoralists, especially in the remote parts. Take for example Daud Mohamed from Eldas constituency who has over the years suffered huge livestock losses every time a new disease strikes.

His misfortunes multiplied when drought hit the area, forcing him to trek long distances in search of water and pasture for his animals.

Sometimes the drugs were not in stock, which meant covering about 320km to Garissa town hoping to find them.

With an almost non-existent road between Wajir and Garissa, the journeys were expensive and time-consuming.

Mohamed, like other pastoralists, lost large portions of his herd to the illnesses and the cycle persisted.

With about 50 per cent of the herd gone, Mohamed faced another cause of more livestock deaths: drought. All of a sudden, the once wealthy man became a pauper.

But things changed for the better in 1998 when Ibrahim Adan set up Eldas Agrovet to supply animal health input and provide consultancy services to pastoralists.

This relief for herders like Mohamed was, however, short-lived because of an influx of counterfeit drugs into the market. Some suppliers would purchase cheap, low quality drugs from across the borders to the detriment of the pastoralists and the agrovet.

In 2015, Eldas Agrovet partnered with Wajir Agrovet. Eldas Agrovet became an agent for the first time and was certain that they would stock quality drugs. At first, the residents were hesitant until they eventually realised that the drugs they purchased at Eldas cured their animals. This restored their faith in veterinary medicines once again.

Eldas Agro vet in partnership with Wajir Agrovet embarked on an awareness drive to further educate pastoralists on drug administration and handling, identification of counterfeits, disease detection and reporting, and commercialisation of livestock farming. This led to Eldas Agro vet becoming a much-needed reliable source of veterinary information for the pastoralists.

Pastoralists such as Sheikh Daud have also been trained to separate their herds depending on their health.

The healthiest of the animals are reared with special care to attain the Grade 1 status. When the goats mature, Sheikh Daud sells them at higher prices then uses part of his proceeds to re-stock.

He saves the rest of the money in a bank for use by his family during the drought seasons. The savings also support the recovery of his wealth after the drought.

Counterfeit drugs and livestock deaths are no longer such a great challenge to Ibrahim, Daud and the pastoralists in Wajir.

The growth of Eldas Agrovet has led to the pastoralists in Eldas managing to enhance their markets and living standards.