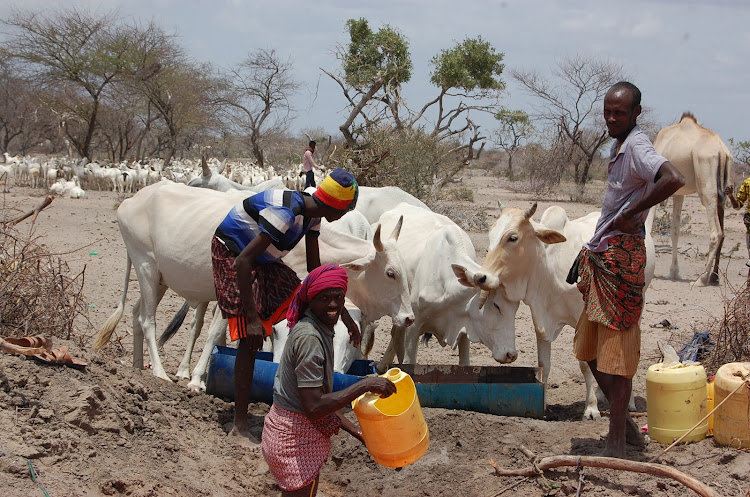 LIVESTOCK Pastrolists from Tarbaj sub county in Wajir giving their animals water in January.The sector accounts for 75 percent of employment in the rural set up, earning the county approximately sh.10.5 billion from Livestock and livestock products annually.
Image: STEPHEN ASTARIKO

Livestock production in Wajir is the dominant economic activity in the county and plays an integral role in driving the local economy.

Over 80 per cent of the population depends on livestock for their livelihoods and food security.

According to livestock executive Ahmed Sharif, the sector also accounts for 75 per cent of employment in the rural setup, earning the county approximately Sh.10.5 billion from livestock products annually.

It is for this reason that the county has over the years prioritised the sector by carrying out massive vaccination exercises as well as providing feeds to the animals and launching missive water tracking exercises during drought.

In an interview with The Star in his office, Sharif said that the recently concluded vaccination exercise managed to cover 1.2 million animals.

He said that was the target before the exercise commenced in early December.

“Livestock farming is the backbone of our economy. As a county, it is our obligation to support our farmers in ensuring that they reap the maximum benefits of their animals by taking care of the livestock‚” Sharif said.

He disclosed that the county gets a good amount of revenue from the sector while acknowledging that challenges such as drought have hit the sector over the years but remains optimistic that with support from the state and non-state actors they can navigate through.

In the project’s blueprint, Wajir county will be accessible through the areas of Nuno and Modogashe, which will be covered by a major international trunk road which is expected to open up the county for business and leisure travel interconnecting the various neighbouring counties.

County secretary Abdullahi Maalim said with wildlife such as giraff­es, antelopes, ostrich, warthogs, dry region snakes, renown scavengers and predators such as lions and leopards, the Ewaso-Ngiro Basin and the Sarova Shaba tourism sanctuary, the county has untapped opportunities for tourism exploration and exploitation.

Other potential tourist spots include Lake Yahud on the outskirts of Wajir town, Wagalla massacre memorial site in Wajir West, Wajir Museum and World War-Two era fortifications including bunkers and underground tunnels constructed by both the British and Italians combatants at Orahey grounds.