Militants flagged down Medina bus and ordered everyone out before separating the passengers.

• The militants separated the passengers into two groups [locals and non-locals].

• It is at this point that they shot dead the eight nonlocals before ordering the other passengers to get on the bus and proceed with the journey. 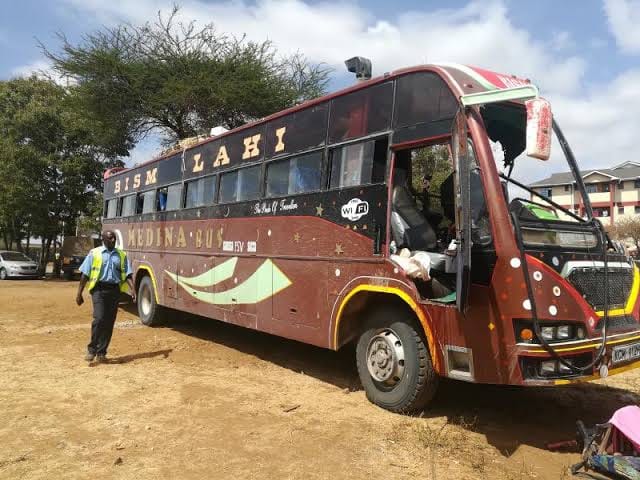 The bus which was attacked on December 6, 2019.
Image: STEPHEN ASTARIKO

Eight nonlocals were killed on Friday after suspected al Shabaab militants attacked a bus between Kotulo and Wargadud in Tarbaj subcounty, Wajir county.

The militants, whose number is yet to established, are said to have flagged down a Medina bus en route to Mandera at 5 pm and proceeded to order everyone out before separating the passengers into two groups [locals and non-locals].

It is at this point that they shot dead the eight nonlocals before ordering the other passengers to get on the bus and proceed with the journey.

Initial reports had it that three nonlocals escaped, but speaking to the Star on the phone, Northeastern regional commissioner Mohamed Birik said that all the nonlocals on the bus were killed.

“Yes, I can confirm that the attack indeed occurred and we lost eight innocent lives of Kenyans. It is unfortunate that al Shabaab has perfected the art of killing innocent souls. It is devilish and sad that their thirst for the blood of innocent Kenyans persists," he said.

Birik continued, "As a government, we will never relent. We will go for them and smoke them out of their hideouts. Our resolve to completely eliminate this region of these heartless people is never in doubt.”

Birik said that security officers led by special forces have been deployed on the ground and are conducting both ground and aerial surveillance as they pursue the militants who are said to have fled back to neighbouring Somalia on foot.

“In the meantime, all the three county commissioners and the entire intelligence committees are under a directive to ensure that suitable measures are put in place to ensure that the lives of Kenyans are protected including providing escort to the buses that ply Mandera and Wajir route. I have already communed the same with them,” he said.

The incident was strongly condemned by a cross-section of leaders from both Wajir and Mandera.

Lafey MP Abdi Mude speaking to the star on phone regretted that the lives of innocent Kenyans were once again being lost in the hands of the militants.

"On behalf of the leadership of Mandera I wish to condemn in no uncertain terms the unfortunate and heinous act of killing innocent Kenyans. The government must come out clean to explain why such buses are not accorded escort as the area is vulnerable and within reach of the terrorists .the government must take full responsibly to save the lives of those innocent Kenyans,” he said.

Wajir Governor Mohamed Abdi while also condemning the incident urged the national government to be proactive in matters security ’and not to wait for such incidences to happen before acting’.

“I want to appeal to our security apparatus to remain proactive and on alert at all times. we cannot be loosing live in the hands of the militants in this day and age,” he said. The attack comes barely a month after Al-Shaabab militia attacked Dadajabula Police Station in Wajir in an attempt to free two terrorists who were being held at the station.