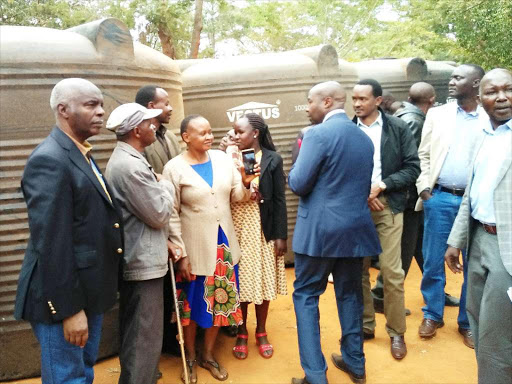 Wiper chairman Kivutha Kibwana has been told to stop attacking party leader Kalonzo Musyoka in public and instead reach out to him.

“We wholeheartedly welcomed Kibwana to Wiper in 2017 thinking that he will help our party leader build the party, now we are surprised that he is turning against us,” nominated MCA Magdalene Mulwa said.

Mulwa asked Kibwana to use his position in the party to correct what he felt was wrong. He should engage Kalonzo privately and sort out any differences he may be having with him.

“Why does he not answer the party leader’s calls?” she asked.

The MCA challenged the Makueni governor to leave the party if he does not believe in its leadership.

“We love this party so much and we will not watch someone bring it down. Please governor, we vigorously campaigned for you and you owe your second term to Wiper. If you now feel uncomfortable in the party please don’t ruin it,” she said.

Since his disagreement with Kalonzo late last year over the party leader’s rapprochement with President Uhuru Kenyatta, the governor has cited disrespect from some party members as the reason for his disquiet.

Kibwana says that some party members have always disregarded his directives as the party chairman and it is for that reason that he has felt not useful to the party.

He complained that some Kitui MPs and MCAs had disregarded his caution against fighting governor Charity Ngilu.

In an interview late last year, Kibwana told reporters that a majority of the party members who surround the party leader are of no help to him.

“They may think by fighting other leaders they are the best ‘boys’ for the party leader but the fact is that they are hurting the party,” Kibwana said.

He says that his recent criticism of the party leader was not intended to divide the Kamba community.

“Not seeing things the same way with another leader does not necessarily mean that you are fighting that leader.

“I am not dividing Kambas and I can’t wish such a thing. However, I will not be forced to support things that I feel are not right,” Kibwana said as he sharply criticised Kalonzo for “begging” to be President Kenyatta’s ‘mtu wa mkono’ (errand boy) during the burial of his father two months ago.

Kibwana said his comments were an expression of his true feelings on certain party issues.

President Kenyatta has since appointed Kalonzo as his special envoy to South Sudan.

Kibwana assumed Wiper leadership on October 11 when party leader Kalonzo left the for Germany to attend to his ailing wife.