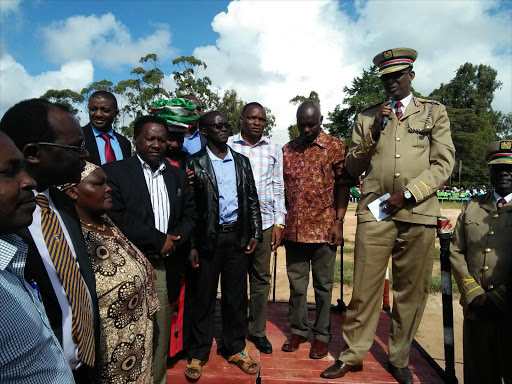 Vandalism of the standard gauge railway in Makueni has reduced by 80 per cent, county commissioner Mohammed Maalim has said.

Maalim on Wednesday said only four cases have been reported since December compared to 19 during a similar period the previous year.

He said vandalism had been encouraged by scrap metal dealers. He attributed the decrease to enhanced security patrols and cooperation from residents.

“The involvement of the community who collaborate with security agencies by volunteering information has led to the drastic reduction of vandalism cases and throwing of stones at the passing trains,” Maalim said.

He spoke at Mtito Andei after chairing a multi-agency security meeting attended by subcounty teams from Kibwezi, Makindu, Nzaui and Mukaa.

The official said SGR has reduced pressure on the Mombasa-Nairobi highway by improving cargo transport.

“At least 16 trains transport containers daily. They will soon be increased to 24 cargo trains per day,” Maalim said.

Maalim said the government has banned grazing of livestock along the SGR. He said trespassers risk arrest and prosecution.

“An electric fence has also been put up to deter wildlife like warthogs, elephants, dik-diks and gazelles from crossing the rail line,” he said.

In December, Maalim warned police would use maximum force to stop railway vandals.

“We want to warn everyone against railway vandalism. Steal at your own peril,” Maalim said. He issued the warning after a man was gunned down along the railway at Emali over vandalism.

Earlier in June, President Uhuru Kenyatta had threatend to have the vandals hanged.