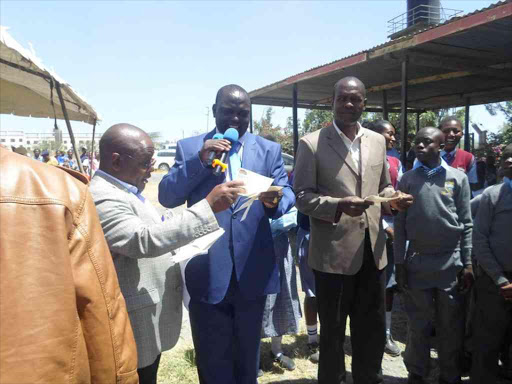 Two Machakos MPs have asked Senator Johnson Muthama to stop coercing and intimidating other county leaders into supporting his preferred candidates for nomination.

Speaking at St Augustine Mulolongo Secondary School on Tuesday when he presided over the issuing of bursaries to needy students, Mavoko MP Patrick Makau said Wiper is for all candidates.

He said all Wiper aspirants should be treated equally.

“We don’t want to be forced to support certain candidates. Everyone should be prepared to go to the people and ask for votes because there are no sacred cows in Wiper,” he said.

Makau’s sentiments come after a meeting convened by Muthama at a hotel in Athi River last Saturday.

A source yesterday told the Star Muthama called the meeting to drum up support for Machakos Deputy Governor Bernard Kiala’s ambitions for the county seat.

MCAs allied to Kiala lectured the MPs present, accusing them of trying to front one of their own to face Kiala in the nomination.

However, Mbui and Makau stormed out of the meeting moments after it started citing a misplaced agenda.

“I am not aware of any Wiper meeting that took place on Saturday because Wiper meetings are held at the national office. If people met that day, they must have been propagating their own interests, not the party’s,” Mathuki said.

He said Wiper, as a democratic party, will give all interested candidates a fair playingground. Mathuki warned those trying to impose candidates on the people to prepare for a rude shock.

While on his voter mobilisation tour in Machakos and Kitui counties on Monday, party leader Kalonzo Musyoka said all candidates will be subjected to a fair and free nomination.

“Whether it is Robert Mbui of Kathiani, Peter Mathuki (EALA) or Kiala here, they will all face it in the nomination and the people will choose,” he said.

Post a comment
WATCH: The latest videos from the Star
by By Andrew Mbuva. @andrewsmbuva
North Eastern
27 January 2017 - 05:00
Read The E-Paper