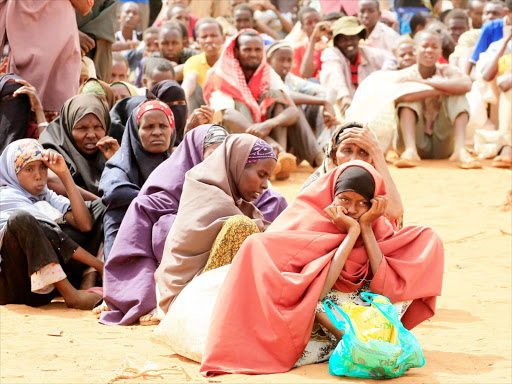 Somali refugees sit in a queue outside a food distribution centre at the Ifo refugee camp in Dadaab in August 2011. /FILE

‘The move will make the threat of terrorism worse, not better’, – says Somalia

But Somalia says: “The move will make the threat of terrorism worse, not better, given the volatile situation this decision and the proposed subsequent actions will cause.”

The country also warned Kenya against breaching a tripartite agreement signed in 2013, with Somalia and the UNHCR. The agreement was for the safe and dignified resettlement of Somali refugees in their home country.

“Abandoning the agreement will be a legal and moral failing on the part of Kenya, because Somalia is turning the corner,” reads the statement. “We are partnering with Kenya to confront global terrorism. Such a mission depends on intelligence and resource sharing as well as partnership and mutual trust.”

Interior CS Joseph Nkaissery has said the Dadaab camp is being closed for security and economic reasons. “It would be inexcusable for the government to overlook its primary constitutional responsibility to protect her citizens and their property,” Nkaissery says. He says the camp has become a breeding ground for al Shabaab and a centre for smuggling contraband and illicit weapons.

Post a comment
WATCH: The latest videos from the Star
by WILLIAM MWANGI @memwarwilliams
North Eastern
14 May 2016 - 05:00
Read The E-Paper