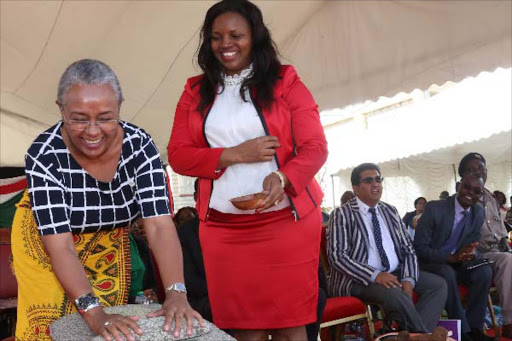 First lady Margret Kenyatta grinds millet using a traditional l grinding stone after she handed over the 28th beyond Zero Mobile clinic to Meru County . Mrs Kenyatta was given the grinding stone as a gift by the spouse of Meru Governor Phoebe Munya.Photo PSCU

She said girls are suffering because some people have refused to abandon negative traditions.

Presenting a mobile clinic to the county yesterday, Kenyatta said Female Genital Mutilation is an impediment to the development of the girl-child.

Meru is the 27th county to receive the clinic under the Beyond Zero Campaign programme.

“Although Meru culture is rich, FGM should be done away with. It causes physiological problems to girls and women. It is one of the causes of difficulties during childbirth. It can cause infections and death,” Kenyatta said.

Early marriage, she said, has hampered the development of girls in the region.

She commended women in the forefront of promoting alternative rites of passage saying many girls are in school because of their bravery.

She urged Kenyans to educate their children saying the future belongs to them.

“Beyond Zero has finally made its way to Meru for the benefit of mothers and children. You will never go wrong when you invest in children.”

Kenyatta was accompanied by Governor Peter Munya and his wife Phoebe.

Kenyatta lauded Munya’s administration saying it has done a lot in banana production.

“I urge residents who have been depending on miraa to diversify and invest in other businesses,” she said.