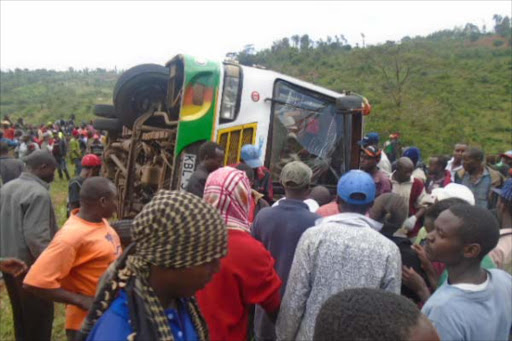 Three people died on Tuesday night on the spot in an accident at Nithi, Maara constituency.

Eight others were seriously injured when the car veered off the road.

Speaking to the Star at the scene, Maara police boss John Njihia said the Sunbird bus was travelling from Meru to Nairobi.

“When it approached Nithi Bridge the driver lost control and hit a motorbike,” he said.

Twelve people were taken to the Chogoria Mission Hospital.

Four of them are in critical condition while two have been treated and discharged.

The exact number of people in the bus was not immediately established.

Uncomfirmed reports indicate it may have been 40.

Witnesses said the driver was avoiding hitting a vehicle that was blocking the road.

It was pulling a lorry that had plunged into the river three days ago.

Njihia said drivers should be extra cautious when approaching Nithi Bridge as it is an accident blackspot.

“They should engage low gear and observe low speed when approaching the bridge,” he said.

The bus rolled several times and landed on its side by the road.

Onlookers flocked to the scene, giving the police a hard time.

Others made away with valuables from those involved in the accident.

This is the third accident to occur at the bridge in a month.

The bodies were taken to Chuka hospital mortuary while the vehicle was towed to Chuka police station.