Bursary funds have been increased from Sh3.5 million to Sh6 million in each ward

• The MCAs slashed Sh400 million from the insurance kitty and injected it into the school kitty.

• In his plan, Sakaja intends to build a central kitchen in all the 17 subcounties, which will be able to serve between 10 to 15 public schools. 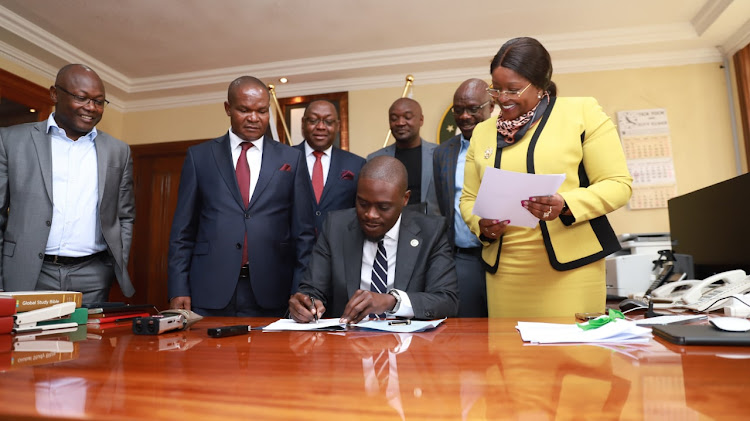 The law aims to re-align funding with his development manifesto for  Nairobi.

In the new re-alignment, Sh11.35 million has been allocated for development expenditures and Sh26.98 million for recurrent.

Top of the governor's priority is the roll out school feeding programmes in the city.

“The feeding programme is one of our hallmark programmes. This financial year we have budgeted for the construction of kitchens," he said.

"The amenities will be completed in time so that we can start using them and do a supplementary budget later in the year.”

The MCAs also slashed Sh400 million from the insurance kitty and injected it into the school kitty.

In his plan, Sakaja intends to build a central kitchen in all the 17 subcounties, which will be able to serve between 10 to 15 public schools.

Also giving needy parents a reason to smile is the increase of bursary funds from the current Sh3.5 million to Sh6 million in every ward.

The assembly led by its speaker Ken Ng’ondi assured the governor of its support and a seamless working relationship with the executive.

He pledged to work in harmony to deliver services to city residents and solve disputes that may arise.

“I trust that in the coming weeks the small business will get what they deserve and smile at your government,” he said.

Nairobi assembly chairman for Finance, Budget and Appropriations Committee Wilfred Odalo acknowledged that the 85 elected MCAs will receive Sh6 million each for needy children who depend on bursaries.

Sakaja however urged the MCAs to play their oversight role to ensure that the funds are properly utilised.

He further lauded the MCAs for passing the budget expeditiously within the timeline of the law.

“Nairobi residents have a lot of hopes in this administration in both the executive and the assembly, which they demonstrated through the ballot," Sakaja said.

"They expect us to give them a city of order, dignity, and opportunities and the tool that we have is this Appropriation Bill that we have signed.”

The county boss emphasised that in his tenure, there must be accountability of every shilling spent, giving a warning that no single official will be protected by the county for misappropriating the funds.

“There must be accountability for each and every single shilling belonging to the people of Nairobi. No one will be shielded in case they are found to have abused these resources,” Sakaja said.

In the re-alignments, the current allocation for the  County Public Service Board will be increased by Sh10 million, while the public service management allocation for medical insurance be reduced by Sh400 million.

This is according to the Nairobi County Appropriation Bill, 2022 that was tabled and approved by the assembly last week by Budget chairperson Wilfred Odalo.

Also, funds for pending legal obligations will be increased by Sh300 million; Sh100 million will be under the Legal department and Sh200 million under the Finance and economic planning sector.

Under the re-alignment, recurrent under Trade and Commerce increased by Sh20 million for pending bills related to consultancy for profiling  SMEs capacity in Nairobi.

He said the legal pending fees were an area of concern yet the county rarely wins court cases.
Counties
3 weeks ago

He said he would find space for hawkers to conduct their businesses.
Counties
3 weeks ago

The authority, Koome said, is anchored in law, including in the National Police Service Act.
News
3 weeks ago