•Speaking at this year’s Clinton Global Initiative (CGI) in New York on Monday, the former president described Odede as a family friend and the true ambassador of his initiative.

•He lauded Odede's work as the CEO f Shining Hope for Communities saying his initiatives have made a difference in society. 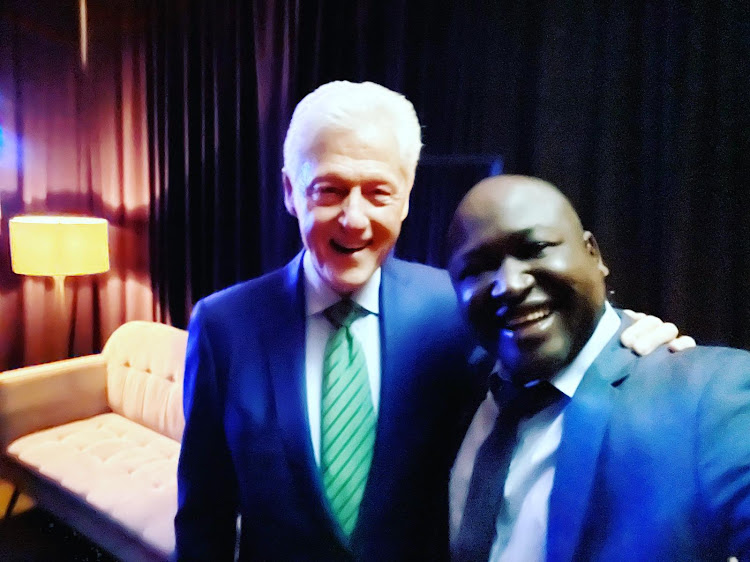 Speaking at this year’s Clinton Global Initiative (CGI) in New York on Monday, the former president described Odede as a family friend and the true ambassador of his initiative.

He lauded Odede's work as the CEO f Shining Hope for Communities saying his initiatives have made a difference in society.

“Pleasure to introduce someone who is to me truly embodies the best of CGI. His (Odede’s) work has improved lives in the most impoverished communities on earth. A long-time friend of our family,” the former President said before ushering him to the podium to speak.

In his address, Odede credited President Clinton for his achievement saying he believed in him 15 years ago when no one was ready to do so.

“15 years ago, I got an opportunity to meet President Bill Clinton and he asked me what he could do for me. He was putting trust in my hands as a community leader.

“He was listening to me, and I requested him to allow me to be part of the Clinton Global Initiative because I knew at that point that my ambition to create an urban poor movement was not something I could do alone. It would take collective action,” he stated.

The Shofco boss called on donors and world leaders to fund community-led organisations to achieve sustainable and long-term impact.

He said local communities must be trusted to solve their own problems instead of relying on external bodies.

“Today, my call to action is, ‘fund local grassroots organisations. That is how they will achieve sustainable and long-term impact. Let us be honest; we are not the answer! We must trust people to solve their own problems. Give power to the people,” he told over 1000 CGI participants.

CGI brings together leaders of NGOs and philanthropic organizations; prominent voices in business, labour, and finance; influential youth advocates and grassroots activists; heads of state and other government officials; and other global citizens.

The purpose of the initiative is to explore effective models for making lasting positive change in society.

Odede challenged world leaders to concentrate on empowering communities at the bottom of the pyramid to avert future crises.

“By 2045, the world’s urban population is projected to reach six billion. Without the capacity to handle this growth, urban poverty will explode. We are at the precincts of the urban spring and emerging economies like Kenya will have to endure this burden leading to further inequality in areas like climate, gender, access to vaccines as well as lack of basic human needs,” he stated.

He added: “I have hope that this will not be the case if we take action together. Currently, the resources are constrained and not reaching the communities in need. We are letting this happen and it is time to get unstuck. Despite the situation I grew up in, I was filled with hope by the community around me. I believed in our abilities. I knew we could do something about it if others would only listen to us and that is how Shofco was born.”

Post a comment
WATCH: The latest videos from the Star
by BOSCO MARITA
Nairobi
20 September 2022 - 18:52
Read The E-Paper