•To use the expressway, motorists choose to use the On-Board Unit (OBU) and Manual Toll Collection( MTC). Each has different lanes at the entry points.

•The highway’s operators had previously said motorists would not be allowed to pay using the M-Pesa service. 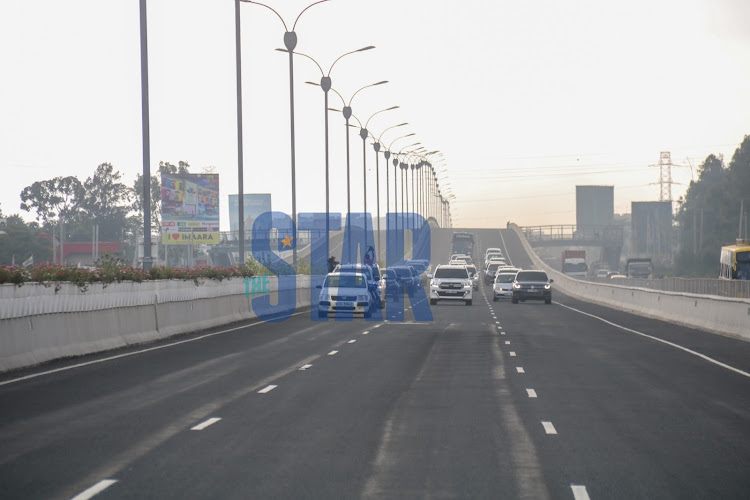 Motorists using the expressway are complaining of payment delays and long queues at entry points.

The Sh89 billion expressway was on May 14 opened on a trial basis. It was meant to give motorists smooth, fast and alternative means of transport.

The motorists were allowed to experience the road's efficiency to improve Nairobi's mobility system.

Last week, at the Westlands entry point the traffic was moving but motorists had queued waiting to be scanned.

Moja Expressway, a subsidiary of China Road and Bridge Corporation and the firm managing the road, has been scanning cars at the entry point and charging the toll fees at the vehicle exit points.

Some motorists decried spending more time on the expressway as the payment process took longer than expected.

“I use the expressway in the evening and there is a long payment queue which is a bit annoying,” Njenga Kamau said.

“The payment method causes these queues. I wish they would allow the use of the mobile method of payment,” Mercy Kerubo said.

To use the expressway, motorists choose the On-Board Unit (OBU) or Manual Toll Collection( MTC).

Each has different lanes at the entry points.

The highway’s operators had previously said motorists would not be allowed to pay using the M-Pesa service.

Motorists opting to use the Electronic Toll Collection service which offers fast and easy transit were not subjected to many hitches.

The MTC will work the same way a credit card works, which will be periodically topped up through electronic payments.

For MTC users, they will be given a pass voucher at the entry point which will be submitted at the toll station before the exit point.

With the pass voucher, the toll station will calculate the amount to be deducted depending on the entry point and distance covered.

Motorists will receive an alert via their mobile phones whenever the funds in the ETC or MTC are about to be exhausted.

Those opting to pay cash will still get the pass voucher at the entry point and will be required to pay at the toll station before the exit.

For the ETC users, the motorists have installed the OBU, a communication device mounted on vehicles.

Once they get to the entry point, the device is detected by the screens and is given access to the expressway, taking not less than two minutes.

To start using the expressway, motorists were required to visit the service centre at Nairobi Expressway Plaza along Mombasa Road and fill in the service subscriber registration form.

However, for the test run, the government allowed all motorists to access the road regardless of whether they had registered or not.

This means that many motorists are using the cash in hand payment which has led to delays at the exit point due to the issuance of change money.

“Normally it takes a bit of time for the toll attendants to give change because some of us don’t have the exact money and we have to wait for the balance,” Tom Wafula said.

“ This is the worst thing about the expressway because of the waiting game at the exit due to balance issuance. But using the expressway is quite a good experience,” Arnold Kimutai said.

Barely a week after it was opened, the numbers had risen to 23,600.

This means that more motorists are leaning towards using the expressway.

The positioning of the entrance at Westlands led to the disorganisation of the pick-up and drop-off point that had been initially set up by the Nairobi Metropolitan Services.

The bus stage used to be a few metres outside Naivas Supermarket but has been pushed towards the roundabout to give room for motorists intending to use the expressway for a smooth entrance.

Matatu owners have now been forced to control the number of public service vehicles, allowing one matatu per sacco at any given time.

They say putting costs on taxpayers amounts to wastage of public funds.
News - Page 6
4 months ago

The NPS clarified that the picketing was not in any way as a result of police actions.
News
4 months ago