Most affected areas are Mathare and Kiambiu which experience fire incidents almost monthly. 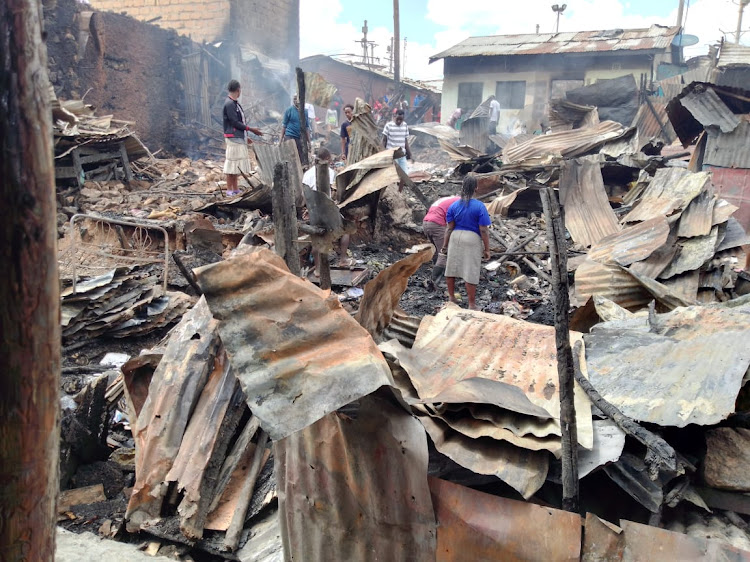 A total of 892 families have been victims of mysterious fires recorded from January 2021 to May 18, 2022, in Nairobi county.

This is according to data from the Tushinde Children’s Trust report on fires in Mathare and Kiambiu informal settlements.

The report reveals that the two slums experienced fire incidents seven out of 12 months last year with 502 families affected.

This year 390 families have been directly affected by fire cases which occurred in both slums, from January until May 18, 2022.

Nairobi suffers frequent mysterious fires, especially in the slums and markets, which destroy property worth millions of shillings.

Sometimes the fires lead to injury or death.

The report further said fire is one of the most prevalent risks faced by inhabitants of informal settlements, with Mathare having monthly incidents that are often under-publicised.

Out of the 12 villages in Mathare, fire is one of the most prevalent risks faced by inhabitants, with Mandera and Baghdad being the most affected areas, each reporting a fire incident almost on a monthly basis.

“Mandera village fires in 2021 affected 60, 80 and 60 families in February, August and April respectively,” reads the report.

The vast majority of fires are attributed to faulty electrical wiring, unattended stoves and arson or vandalism from gang conflicts.

However, the report indicates that the slum residents face the difficult task of extinguishing the blaze since they receive little assistance from fire trucks from Nairobi county.

With a population of more than four million, Nairobi has been relying on the Koja fire station on Tom Mboya Street, which was built in 1907 and another at Industrial Area built in 1957.

Two more fire stations have been built so far, in Waithaka and along Kangundo road, with a third one being constructed in Gigiri.

And in October 2017, Somati Vehicles NV, a Belgium-based company, donated 26 fire engines to the county.

Despite the availability of the fire engines, victims have complained of late arrivals,  with engines sometimes having insufficient water.

The government has in the past said slums suffer from poor road networks and lack of accessibility, making it difficult to respond promptly to fires, health emergencies and other problems.

Despite the constant condemnation of fire incidences by MCAs, local or national government arms rarely assist in humanitarian and recovery efforts after the fire, a task that is often left to NGOs.

Tushinde organisation is among the NGOs which have stepped up and has facilitated emergency family interventions by providing food, blankets and hygiene packets.

The report also reveals that children from the affected families usually undergo unimaginable psychological trauma, having to start over every time there is a fire.

The report suggests that government should have a counselling programme provided in the schools for the affected children and workshops for parents on how to prevent such fire incidences.

It also recommends that the incoming government should find ways of ensuring that cases of slums fires are reduced.

This is to be done through proper electricity connections, rehabilitated feeder roads and ensuring fire engines are always loaded with water to prepare for such cases.

However when reached for comment, Governor Ann Kananu said her government has made effort to ensure fire services are delivered with efficiency.

She said the additional fire stations will address all previous challenges met during the fire incidences.

“In the next financial year, my administration will allocate more funds to ensure we drill more boreholes to supply water to the fire stations in addition to the water hydrants,” she added.

Fire stations within Nairobi have been dependent on water hydrants for supply to tackle fire disasters.

Most of the hydrants were damaged when the Thika Superhighway was being constructed.

The centre will be the focal point for coordinating the response to emergencies and disasters.
Counties
3 months ago

Another fire destroyed a printing firm's warehouse along Mombasa Road
News
4 months ago
“WATCH: The latest videos from the Star”
by MAUREEN KINYANJUI News Reporter
Nairobi
25 May 2022 - 22:00