• Flone hopes that the training will help formalise the role of conductors to change Kenyans' perception that touts are a nuisance.

• The conductors will be trained on how to deal with passengers, conducting themselves as professionals and how to handle work-related harassment cases. 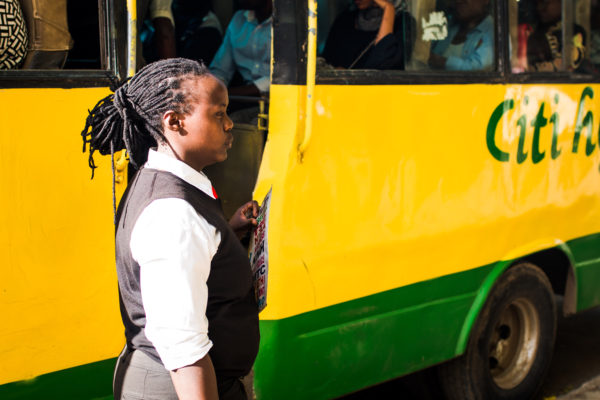 Kenyans perceive the matatu industry as a ruthless space run by reckless drivers and rowdy touts.

It is also considered to be a male-dominated industry and the few women in the sector are frowned upon.

However, a Nairobi-based organisation is out to change that opinion by training women conductors.

Flone Initiative, an organisation that seeks to safeguard women and girls in transport, has partnered with the Kenya Bus Service to sponsor five women conductors through training.

Flone's communications officer May Rakel Anuda said the training aims at making the work formal so that more women can have the opportunity to join the sector and earn a living.

Anuda says many people do not regard touts as professionals because they do not undergo formal training, matatu owners also shy away from employing women because of this reason.

"Conductors have always been known to learn on the job. However, Flone is determined to formalise the role by offering professional training to women aspiring to join the transport sector," she said.

The two-week training, Anuda said, will teach the women how to administer first aid in case of an accident, as well as how to handle work-related harassment cases.

They will also learn how to deal with passengers without heckling them or being rude to them.

According to Flone, the women will graduate on October 19 with better skills that will help them to get lucrative jobs in the sector.

The training is part of Flone’s Women In Transport programme that seeks to give them the necessary support to thrive in the industry.

“The women aspire to start out as conductors, climb up the ladder as drivers and eventually to be Public Service Vehicle owners and managers,” Anuda said.

In 2019, a female conductor in Nairobi popularly known as Understanding shared with the Star that she had hopes of becoming a driver by 2020.

She said that having to take care of her home after a long day of work takes a big toll on her.

“I wash clothes, dishes and do all house chores after I arrive from work at 10 pm,” the mother of two told the Star.

Carol, a driver, said she had to fight for respect in the industry. She even had to fight off a male colleague once, who had tried to harass her.

“We fought and I told him to report it to the Sacco. I was lucky because I am known as a mother and carry myself with respect so he was fired,” she said.

Anuda said that despite challenges resulting from care work and the prejudice they face as women in the industry, the women were determined to change the narrative and follow their careers.

Flone had organised a similar sponsorship programme last year for women living in slum areas in Nairobi to cushion them from the financial constraints of the pandemic.

The programme helped women aged 24 and above to get driving licences so they can be better positioned to get employment in the industry.