MCAs under fire over stalled and unimplemented WDF projects, Mutura tells them to act

• MCAs deplored the county hadn't fast-tracked implementation of the WDF.

• They accused NMS and City Hall of taking them in circles over WDF projects. Most projects are under NMS now. 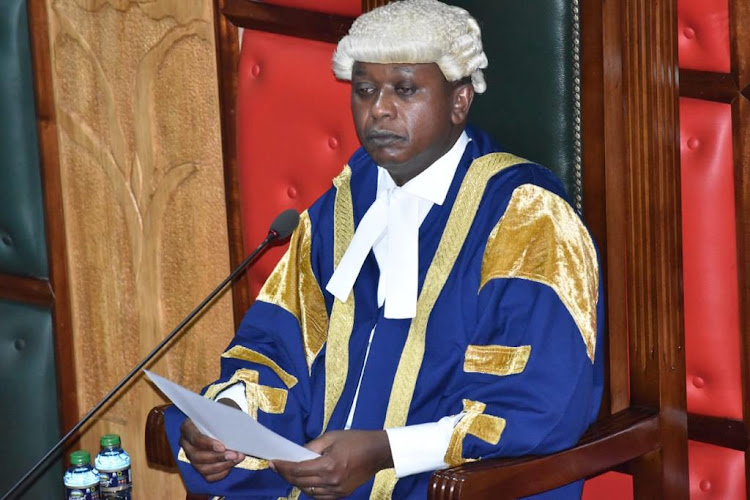 Nairobi MCAs are breathing fire over stalled and unimplemented Ward Development Fund projects in their constituencies.

The MCAs have accused the executive and Nairobi Metropolitan Services of taking them around in circles whenever they try to find out why they stalled.

Most of the WDF projects are infrastructure said to have stalled before NMS took over key county functions last year in March. Others were for the last financial year but have never been implemented.

“This merry-go-round must stop, Mr Speaker. We are starting another financial year in a few months," Komarock MCA John Kamau said.

"However, the projects for the last year have not even commenced and some for 2019 are incomplete,” he said.

Speaker Benson Mutura told the MCAs to stop complaining and start taking action because they have a lot of power.

told the MCAs to stop complaining and start taking action because they have a lot of power.

A sit down with NMS, City Hall and MCAs was suggested.

During Thursday's plenary session, Kiamaiko MCA James Mwangi said the 85 lawmakers have only 15 months until elections. They have to show voters they delivered on the promised projects, mostly under the WDF.

“There is a new game of cycling between NMS and the county executive where when you go to one office, you are referred to another. We are tired with these games of patapotea and it’s we who will be on the receiving end back at the ward,” he complained.

Approved projects must be community-based.

As of March 2019, MCAs said the county hadn't fast-tracked  implementation of the WDF fund.

Kindly take charge because  this house has all the mandate. We can’t have MCAs lamenting in the house while people back in the ward are crying.

They accused the executive of taking them in circles since 2014, blaming the Controller of Budget for not releasing the ward funds.

Desperate, the MCAs called on Speaker Mutura to intervene between City Hall and NMS to get the WDF projects rolling.

However, Mutura urged MCAs to be more aggressive on the issue and use the power they have been given by the law.

He emphasised the assembly has the power to freeze everything in the county until their demands are met.

“Kindly take charge because it is this house that has all the mandate. We can’t have MCAs lamenting in the house while people back in the ward are crying.

“As a house, you have all the powers laid out in the Standing Orders and you have already demonstrated guided by the law that you can impeach, summon and basically you can even fire,” Mutura said.

Taking them to task, the speaker turned to the assembly leadership to take charge and find a fast solution.

He said in his capacity as speaker, he can only adjudicate and see that matters move in the right direction.

“I urge the leadership of this house to take charge and bring order because this is a small matter that can be dispensed with. I’m equally surprised everyone is lamenting day in day out. Kindly take charge,” he added.

In October, NMS took charge of WDF after MCAs moved it from the governor's office to public works.

The move took place as MCAs approved the county budget of Sh35.5 billion after amending the appropriations bill. NMS got Sh27.1 billion.

Assembly budget committee chairman Robert Mbatia said the reallocation of the WDF to NMS was to ensure all projects in the wards would be completed on time.

“Underdevelopment, we have transferred in totality the Ward Development Fund component from the office of the governor to public works, which is now under the Nairobi Metropolitan Services,” he said.

“On WDF, we request the office be relocated because it is a fund and its budget and allocation are under Public Works,” Mbatia added.