Only the house leadership and the business mover will be allowed in the chamber.

• The MCAs are required to keep off the assembly precincts unless in exceptional circumstances.

• The directive is similar to one issued in the National Assembly last Friday declaring Parliament Buildings, Continental House and Protection House out of bounds. 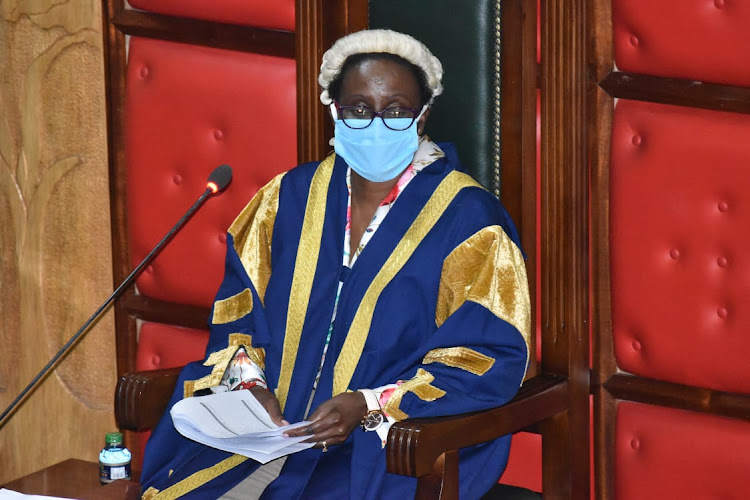 The decision was arrived at during a special meeting of the County Assembly Board on how to implement Covid-19 guidelines.

"In spite of the tests revealing a number of Covid-19 positive cases, there has been lack of strict observance of the issued guidelines and measures meant to enhance the efficacy of the management of the disease and protect all Kenyans from its effects," Kinyua said in a circular.

The MCAs are required to keep off the assembly precincts unless in exceptional circumstances, Elachi told the county legislators during the afternoon plenary sitting.

Only the house leadership and the mover of the business shall be allowed in the chamber.

“Beginning this Thursday, July 23, we shall be holding virtual sittings. All other members shall follow and participate in assembly proceedings via Zoom,” Elachi said.

Kinyua's circular said that all government meetings of more than four staff should henceforth be done virtually.

"Where the concept of working from home has been successfully implemented, such arrangements should continue to apply with clear targets and deliverables for the officers,” he directed.

Consequently, Speaker Elachi directed the Office of the Clerk to facilitate the virtual sittings. The clerk will be sharing documents and communicate with staff electronically.

Visitors will not be allowed in the assembly precincts including committee rooms unless in exceptional circumstances. They should instead communicate electronically.

The speaker said there will also be a scaledown of assembly staff turning up for work.

The Service Board, Elachi said, will provide adequate PPEs and sanitisers as a mitigating measure against the spread of Covid -19.

“Hon members these measures are aimed at protecting you and your loved ones from this dangerous virus,”she said.

The directive is similar to one issued in the National Assembly last Friday declaring Parliament Buildings, Continental House and Protection House out of bounds. All staff were ordered to work from home for 12 days.

Only a few crucial staff at the offices of the clerk and sergeant-at-arms are allowed in Parliament Buildings. The rest, including MPs' assistants must work from home.

Elachi had last month when the house business resumed after a three-month recess hinted at the possibility of holding sessions virtually.

There was a reduction of plenary sessions from three to two on Tuesdays and Thursdays.

Wednesday sittings were cancelled to allow for the fumigation of the chamber and assembly precincts.

"The assembly shall borrow from what the National Assembly has been doing. We shall be having two sessions in the morning and afternoon,” Elachi said.

To ensure social distancing, the sitting capacity was reduced to a maximum of 42 members against the normal 122.

The MCAs have been attending the plenary sittings alternatively to give each member equal opportunity to be in the plenary. Only the house leadership was allowed in all sittings.

"Members will log in online and register early so that the speaker can check the numbers from Jubilee and Nasa for the house to be in order before sessions start,” Elachi said.

Committee sessions were and will also be virtual since the county assembly is "in a high-risk area".