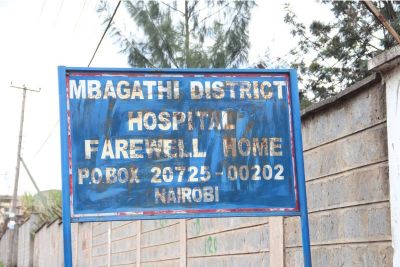 The Mbagathi Hospital has 97 unidentified and unclaimed bodies in its morgue.

The hospital has appealed to those with missing loved ones to visit and establish if they are among those in the mortuary.

Mbagathi is also appealing for the collection of the 56 male and 41 female bodies.

The bodies have been unclaimed since April 2017 when the morgue received 12 bodies. Seventy bodies were delivered in 2018 and 15 this year.

County Health Executive Mohammed Dagane yesterday said they are concerned that nobody has either identified or collected any of the bodies.

"The county is going to do a gazette notice for publication in the dailies with the names of the 97 unclaimed bodies for ease of identification," Dagane said.

Bodies which will not be collected soon after the gazette notice will be disposed of according to the Public Health Act, he said.

Acting county secretary Leboo Morintat regretted that so many bodies were uncollected.

"Ninety-seven is a big number at Mbagathi and we can’t have more than 100 uncollected bodies,” Leboo said.

He said they will seek help from the police in the identification of the uncollected bodies and reach out to the families of those identified.

Mbagathi health administrative officer Nelly Induli said they had forwarded the names to the county for publication in the gazette notice.

The hospital will issue a 21-day notice and thereafter bury the bodies in a mass grave at Lang'ata cemetery, Induli said.

She said they will be compiling a list of the unclaimed bodies on a monthly basis with the aim of reducing pile-up at the morgue.

Mbagathi public health officer Emmah Gwaro said the Public Health Act recommends that a body should be removed from the mortuary within two weeks and thereafter disposed of.

Mbagathi superintendent of health Joseph Karani said the bodies will be disposed of professionally.

Last month, City Hall published the names of 23 unclaimed bodies at the City Mortuary. Only half of the bodies were thereafter identified and collected.

Back in 2006, the City Mortuary and Kenyatta National Hospital Mortuary raised concern than many bodies had been unclaimed bodies for a long time.

Both mortuaries disposed of more than 1,500 unclaimed bodies in a span of five months. They lost Sh5 million in mortuary fees.