Land owners in the next two or three months will receive their lease titles.

•Lack of ownership documents, especially in Wabera, Bulapesa and Burat, continues to hinder the development of commercial and residential properties due to multiple legal battles that have left the plots idle.

•With the issuance of the allotment letters, land owners in the next two or three months will receive their lease titles. 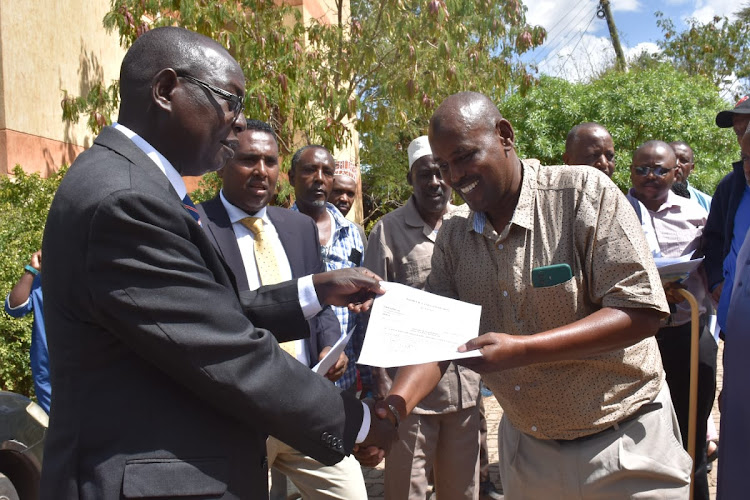 Land grabbing and insecurity will soon be an issue of the past as Bulapesa residents get allotment letters.

On Monday, Isiolo Deputy Governor James Lowasa presided over the issuance of the first 295 allotment letters.

He disclosed that the county government had paid the requisite standard premium.

"Governor Abdi Guyo's administration is prioritizing matters of land security and will work closely with National Land Commission to ensure both individual pieces of land and community land have documentation," Lowasa stated.

With the issuance of the allotment letters, land owners in the next two or three months will receive their lease titles.

The DG announced that the exercise will soon be rolled out in Kiwanjani, Checheles and Olla Odha, and other areas that have in the past experienced conflict relating to land ownership.

Lack of ownership documents, especially in Wabera, Bulapesa and Burat, continues to hinder the development of commercial and residential properties due to multiple legal battles that have left the plots idle.

The adjudication process in the two wards alongside Garbatulla started in 2018 but was halted after some local elected leaders and residents moved to court to challenge an August 2019 legal notice that excluded some of the areas from the process.

The schedule that was amended in early 2020 exempted Isiolo township, military installations, the Lapsset corridor, holding grounds and national reserves from the adjudication process.

Giving advice to the community, Lowasa urged and explained to parents the need to have a will in place as a measure of avoiding conflict among their children in the future.

CEC for lands and physical planning Yussuf Dhahir regretted that 50 years after independence Isiolo only has 400 lease titles.

He disclosed that the County will help fastrack more than 3000 titles before the end of the year.

"We are appealing to His Excellency President William Ruto to consider as an affirmative action by making a directive on waivers concerning land documents for our people, " he said.

The two were addressing the media at Isiolo Arthi House during the disbursement of the allotment letters.

Last year in July, the government issued 6,000 land title deeds to residents of Ngaremara and Oldonyiro in Isiolo, ending a long wait for the documents.

This brought to 6,300 the number of titles in Kenya's sixth largest county which occupies 25,336 square kilometres.

According to the National Treasury, the documents would enable the residents to develop their land and earn income.

During Jamhuri day,Guyo marked 110 days since he was sworn Isiolo's third Governor.
Counties
1 month ago
Post a comment
WATCH: The latest videos from the Star
by MAUREEN KINYANJUI News Reporter
Eastern
17 January 2023 - 17:28
Read The E-Paper