Deceased include a husband, wife, their three children and two grandchildren 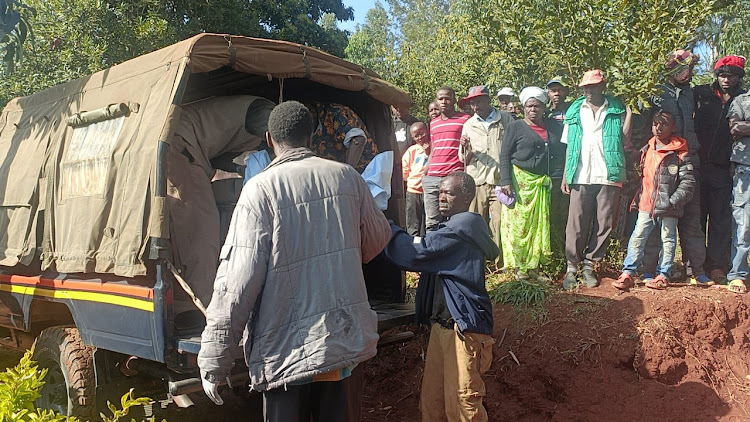 A husband, wife, their three children and two grandchildren died on Sunday morning after fire burnt their house in Ngimari village in Embu county.

According to Benjamin Njeru, a relative to the deceased, the fire occurred at 4am.

Speaking to the Star, Njeru said he was woken up by light rays through the window and on looking out, saw his son's house on fire.

He said he couldn't get closer to the house because the fire had already spread. He then tried to call out his relatives who did not respond and started screaming for help.

"I started screaming but my voice was not loud enough. Two of my neighbours fortunately heard me and joined me in calling for help," Njeru said.

However, he said even as  well-wishers tried to put out the fire, it had  already caused damage.

Speaking at the scene, Embu East Subcounty deputy commissioner Jane Waruinge said the cause of the fire was not yet established and that investigations are underway.

"We're saddened by the news that we have lost seven members of the same family through the fire.  A husband, wife, their three children and two grand children," she said.

Various leaders from the county have condoled with the family and friends.

Embu Women Representative Pamela Njoki and Runyenjes MP Erick Muchangi have both urged the residents who could be having information on the cause of the fire to forward the same to the security agencies to help speed up investigations.

"It is a sad moment for everyone and I take this opportunity to pass my sincere condolences to the family and friends. I would like to ask anyone with the information to kindly forward to the nearest police station to help with investigations," Njoki said.

The bodies were taken to Embu level 5 hospital mortuary.

School principal said the matter was reported at Nalondo police station and is being investigated.
Counties
2 months ago

Eric Ratemo, a local chief, said at least 77 students lost their property.
News
2 months ago
Post a comment
WATCH: The latest videos from the Star
by BENJAMIN NYAGA
Eastern
02 October 2022 - 22:00
Read The E-Paper