Makueni MCAs in mock swearing-in ahead of first sitting Wednesday 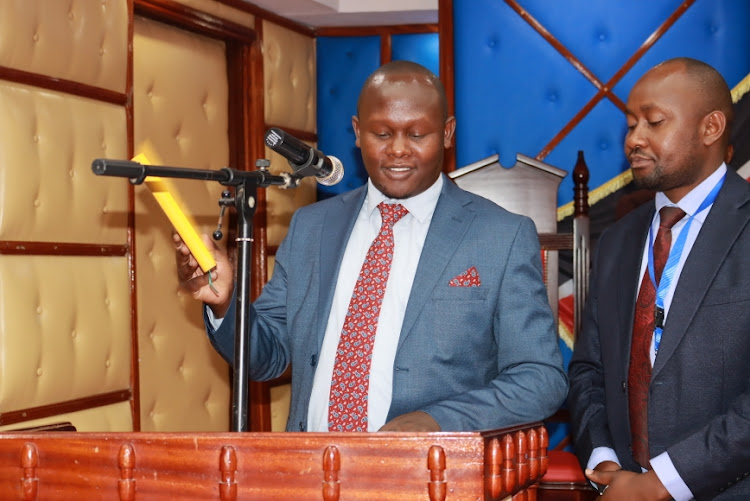 Makueni MCAs on Saturday conducted a mock swearing-in and orientation exercise at the county assembly ahead of the official first sitting scheduled for Wednesday during which they will formally take oath of office.

“We are all gathered here at the assembly with all MCAs to do mock swearing-in and orientation on how to carry themselves and to avoid confusion during the ceremony next week on Wednesday," said Makueni county assembly clerk Kevin Mutuku on Friday outside the chambers in Wote town.

Mutuku who led the exercise said the move was to enable about 50 per cent of the newly elected MCAs to understand the Assembly procedures and familiarise themselves with the assembly environment.

"We found it important to conduct this exercise because 50 per cent of the current MCAs have not been legislators before and need to get orientation on the procedures of the house,” Mutuku said.

He said the exercise will enable the MCAs to understand the protocols, procedures of the house and how they will conduct themselves during their term at the assembly.

Makueni county has 48 MCAs with 30 elected and 18 nominated. Out of 30 elected MCA, only 11 MCAs retained their seats in the August 9 general election.

He added that the leaders duties will be aligned to their professional competences and experience to help the assembly deliver better.

"We requested them to come with Curriculum Vitae because we know that some of them are professionals and we shall make good use of them," he added.

On his part Kilili/Kalamba ward MCA Francis Mutuku said they are expecting to perform their duties smoothly because majority of his colleagues are from Wiper Party.

Chebukati gazetted the list of party nominees to the Senate and National and county assemblies.
News
2 weeks ago

Polls agency chairman says lists can only be changed through a court order
News
2 weeks ago
Post a comment
WATCH: The latest videos from the Star
by KNA
Eastern
18 September 2022 - 22:00
Read The E-Paper