Village is full of 'gold', says woman who quit job to rear poultry

Colleta Musyimi from Machakos is now a millionaire

• The mother of three said her business that started with Sh1.2 million capital has now grown. 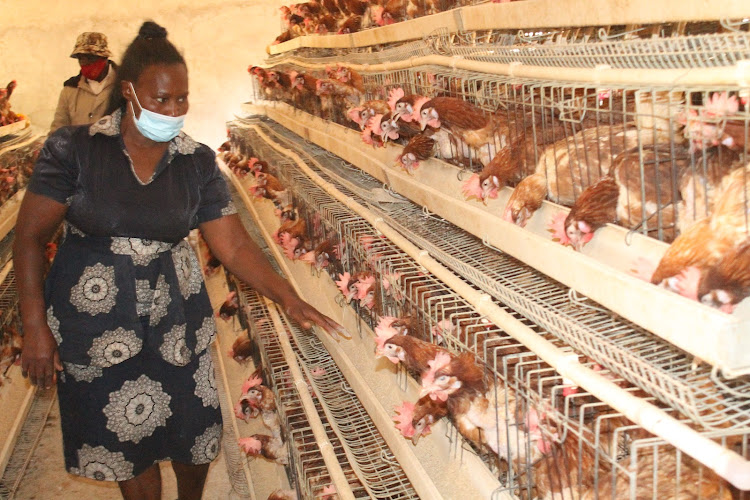 GOLD IN THE VILLAGE: Colleta Musyimi feeding her chicken at her farm in Mbiuni village of Mwala, Machakos County on Thursday.
Image: GEORGE OWITI

A woman in Machakos who resigned from formal employment in 2016 to venture into the poultry business says there is gold in the village.

Colleta Musyimi ventured into poultry farming immediately after she ditched her secretarial job at a Nairobi-based private company. She is now a millionaire and has never looked back.

The company dealt in molasses production and she saw opportunities and readily available markets. Musyimi had initially tried hardware and wholesale businesses in the same locality but later resorted to poultry.

The mother of three says she started with a Sh1.2 million capital. The business has now grown.

“I started with 300 chicks, but later added 700, making them 1,000 after realising that the business was thriving and I was making lots of profits,” Musyimi says.

She spoke to reporters on Thursday at her home. She had just taken Africa Network for Animal Welfare NGO officials, led by Dennis Bahati, the programmes manager, animal welfare, through the project.

Musyimi said the battery cages and modern technology used in poultry rearing are very profitable. She incurs minimal management costs, though the initial installation of the system is expensive.

“My motivation was when I realised that there were no people in the business from the entire Mbiuni and Masii area. I, therefore, opted to venture into the business,” Musyimi said.

“There are challenges when the chicks are young from one day old to three months. The challenges include diseases, but after they start laying eggs at four months, no much work and diseases.”

Musyimi said the technology doesn’t require much labour as the birds are in cages. She only has one labourer attending to the 1,000 birds.

“The battery cage system is good since there is no wastage of feed, eggs don’t get dirty and the birds are safe,” she said.

“The birds feed at all times because the technology allows for self-service as water freely flows into the cages, separately from where the birds are fed. They equally have laying boxes where eggs are picked once they lay.”

She collects a minimum of 26 crates of eggs in a day, each contains 30 eggs, translating into 780 eggs a day.

Musyimi has a readily available market where she sells each crate of eggs at a minimum of Sh300. She sells at least 100 crates after four days. Her business is under CCTV.

Musyimi said death rates among the birds are very low, movements restricted and birds disposed of after two years and four months at Sh400 each when they can no longer lay eggs normally.

“I advise Kenyans to venture into this business if they are capable. One-day-old chick costs Sh120. With good capital, you can start with 1,000 chicks making Sh120,000.”

Musyimi said, these can be fed with 2o bags of chick mash for the first month and 25 bags of the same on the second month, each bag costs Sh2, 700

Despite the gains from this modern technology, Africa Network for Animal Welfare NGO has raised concerns stating that it infringes on birds’ rights.

“As an organisation, we advocate animals welfare best practice, focusing on and promoting the humane treatment of all animal species, both domestic and wildlife,” Bahati said.

“There are three main chicken production systems; free-range, deep litter and battery cages. The battery cages system is gaining momentum because it offers many benefits on ensuring maximum production compared to other systems.”

Bahati said when it comes to welfare concerns, especially on the animals, the birds are constrained, their natural behaviours are restricted as they cannot move around, nest or flap their wings.

“Farmers practising these modern systems, let’s sit down and discuss the issues and gain as much as they can from the production systems and check on aspects of animal welfare,” he said

“We advocate the free-range system where poultry can roam around freely and enjoy their freedoms.”