He died suddenly at a city hospital aged 57 while facing rape, bankruptcy charges 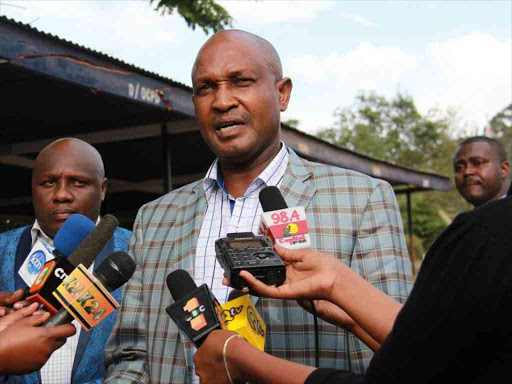 While losing his parliamentary seat may have been the biggest set back to his public life, former Imenti Central MP Gideon Mwiti knew numerous battles, fighting some to his deathbed.

At the time of his death last Sunday, Mwiti was having twin high-stake battles in court, one seeking to declare him a rapist and another, bankrupt.

The former lawmaker who lost his seat in the last elections died suddenly at a city hospital aged 57.

His family attributed his death to complications related to diabetes.

His son Mutethia Irea told the press his father was largely in good health until last Saturday night, when his underlying condition aggravated. They rushed him to the hospital where he passed a few hours later.

But a dig into the former legislator’s past suggest that he was a battle-hardened politician and businessman who had to endure much tide in his rise to the top.

The bankruptcy case against him arose after his micro-finance firm, Akiba Micro-Finance, collapsed with savings of 6,000 members and unpaid loans.

The court green-lighted court action in 2018 to declare him bankrupt over the debt worth Sh6.1 million.

Diamond Trust Bank was granted a receiving order by the court to oversee his estate in preparation for the proceedings.

A receiver manager was to be appointed after he forwarded the list of his assets and liabilities in a bid to recover the money his company owed to the clients.

The bank’s case against the micro-finance was brought in 2005 due to a loan facility that it had borrowed but failed to pay. The court ordered Mwiti and his co-owners to pay up in 2008.

The outfit had it branches spread across the city and adjacent towns.

It collapsed in 2005 when Central Bank of Kenya suspected that it was engaged in pyramid scheme activities, and ordered its closure.

The court however, in 2011 acquitted Mwiti and his group, finding that they did nothing wrong.

Mwiti would in turn bring the case against their accusers, applying to have judgment entered against them.

They also sought orders to compel Central Bank to release their properties and documents or a deposit of a Sh2 billion undertaking for damages.

The court ordered release of their documents and properties and ordered the Central Bank to negotiate with them a suitable compensation.

On yet another battle, while still MP in 2015, Mwiti was accused of raping a journalist in Nairobi.

The charge against him was still active before Nairobi chief magistrate Francis Andayi.

Mwiti denied all the charges.