They say they are ridiculed when they report to police; their children also mistreat them.

• Men are saying their role in the family has been diminished and they cannot lead as they used to because of beatings by their wives.

• InuaWazee patron Joseph Wega said this situation has contributed to frustration among men and a number of men have committed suicide. 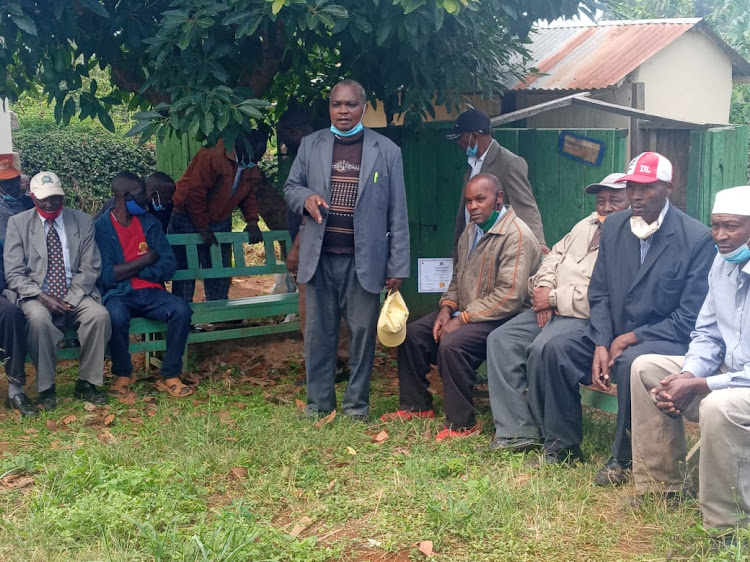 SPEAK UP:: InuaWazee partron Joseph Wega and members at a meeting in Kiriari, Embu North, on Tuesday.
Image: Benjamin Nyaga

Married men in Embu county have raised the alarm over what they call rampant mistreatment by their wives and children.

They cited physical abuse, denial of conjugal rights on flimsy grounds and ‘cold wars’ within their families.

Members of InuaWazee Self Help Group in Kiriari, Embu North, have, therefore, appealed to the government to intervene.

The group partly blamed the assaults on rampant drugs and substance abuse among young men.

They said whenever they report the mistreatment by their spouses to the police, they are ridiculed and dismissed as cowards. Their family roles have been diminished and they can no longer lead, they lamented.

“Men have been sidelined and we are not important anymore. Women have taken over as we have no power. We cannot report mistreatment to the police and whenever you try fighting back, the police act very harshly,” InuaWazee patron Joseph Wega said.

He said the situation has contributed to frustration among men, which has resulted in a number of suicide cases.

“We are facing difficult moments in our families; we cannot enjoy marriage. We urge the government to empower men and consider balanced treatment of both men and women in the county,” InuaWazee chairman Samuel Muturi said.

The men have formed a self-help group to unite and have a voice in cases where one of them faces challenges in the family.

“I encourage men all over the county to consider forming such groups to have power and for their voices to be heard. This will allow men to have their rights considered,” David Murage said.

Post a comment
WATCH: The latest videos from the Star
by By Benjamin Nyagah
Eastern
03 June 2021 - 06:40
Read The E-Paper