Phase one which currently underway includes the construction of the 80.5-metre wall, the reservoir and the rock-filled dam.

• The dam will supply up to 150,000 cubic metres of water daily for domestic use and is expected to be the main source of water for Konza Techno City.

• The dam water will be used for the production of hydroelectric power generation, irrigation and domestic use. 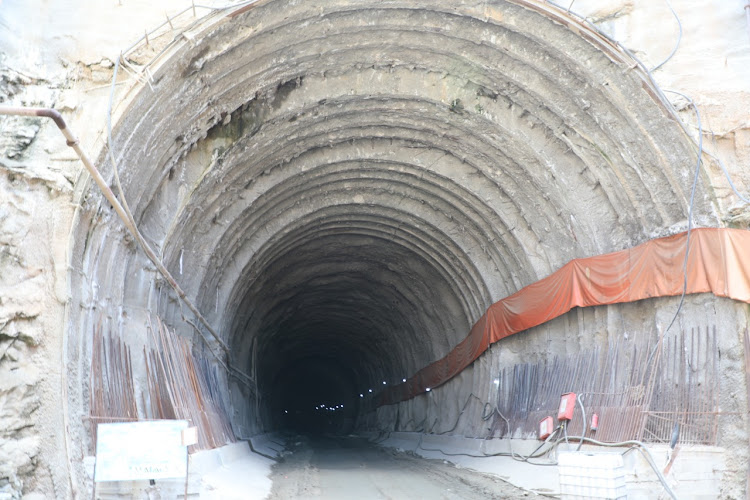 One of the diversion tunnels at the Thwake dam with a diameter of 12 metres.
Image: KNA

It’s Tuesday, January 19, precisely 4.41pm inside the quarry section of the Thwake Multipurpose Dam at the confluence of rivers Athi and Thwake at the border of Makueni and Kitui counties.

There is a flurry of activities. A massive blast is just about to go off. All is set.

Moments later, as if on cue, workers scamper from the site. Though the explosion is within the required decibels, the flying debris is hazardous.

"It can hit people and cause injuries. Only one person is left to monitor the explosion," the assistant resident engineer for tunnels and structures, Ephantus Mbaya tells us.

We also scurry for safety and huddle ourselves on an elevated ground, far away from the quarry. The view is panoramic. We flash our cameras and phones to capture the anticipated moment.

In a fraction of a second, a thunderous bang rends the air and a huge cloud of dark brown dust billows from the ground completely obscuring the quarry from sight.

"The blast was a small one today. We have had massive ones and they can be scary," quips Mbaya.

We watch as the thick cloud of dust rises skyward before it tips over and travels across the western side of the dam. It eventually fades away and an eerie calm settles on the quarry.

Scrappy boulders lie on the site. The hard rock, reduced to mere rubble by the explosive, Ammonium Nitrate.

We descend the slope in a single file. Several white trucks make their way to the quarry. By the time we arrive, an excavator has already loaded one of them with the boulders.

"These boulders will be used to construct the rock-filled dam which will also have an impermeable concrete face of a height of 80.5 metres," says the engineer.

Behind the wheels of the excavator is Victoria Mutueleli aged 36. She performs her work with diligence and military precision. It takes her about four minutes to load a truck. Numerous trucks have lined up. We wait patiently for Mutueleli to finish up, before she grants us an interview.

"I joined Thwake Dam project in January 2019 and the experience so far has been worth it," says the single mother of two.

She trained as a plant operator at the National Youth Service (NYS) College in Gilgil graduating in 2009. Prior to Thwake, Mutueleli worked at the Standard Gauge Railway (SGR) where she honed her skills.

Passion is what drives her to work in the male-dominated field. Her work includes drilling, lifting and loading boulders or heavy soil, digging and excavation.

"I am very passionate about what I do. Although it raises eyebrows especially among men. I remain strong,” Mutueleli adds.  Despite the challenges, her exceptional expertise has earned her respect among her bosses and peers.

"They have confidence in me and my work and this really boosts my morale," confesses the plant operator.

With the job, Mutueleli leads a fairly comfortable life. "I am able to pay school fees for my children in a boarding school among other expenses," she notes.

The plant operator who hails from Machakos is among hundreds of people employed to provide both skilled and unskilled labour for the project.

According to Water Secretary Engineer Samuel Alima, close to 1,000 people are currently engaged on the project and an additional 400 will be recruited to expedite the works.

Most of the workers are drawn from local communities in Makueni, Kitui and Machakos counties. ‘‘By the time the project is complete we will also have created more than 600,000 indirect jobs," Alima says.

Alima says besides the employment, 11 per cent of the contracts totalling Sh11 billion were awarded to the locals while Sh80 million has been allocated for Social Corporate Responsibility (CSR) programmes in Makueni and Kitui counties.

The CSR kitty will fund rehabilitation and equipping of schools, health facilities and water projects. They include Kathiani health centre, Kathulumbi, Kamutonye, Ngiluni and Kitoto secondary schools in Makueni county. Others are Kanyangi Level 4 Hospital, Nzambia and Makanda dispensaries and Kilisa primary school in Kitui county.

The water secretary expresses his satisfaction with the progress of the dam that currently stands at 46 per cent complete. "The speed has been marvellous. Excavation of the two tunnels and spillway is complete and we are now embarking on the concrete works," Alima notes.

He allayed fears of the pollution of River Athi, the main source of water for the dam. He reveals that the government has put in place elaborate measures to clean the river and ensure that the water is safe for human consumption.

"We have formed a multi-sectoral team which includes the Water Resources and Management Authority (Warma) and the National Environment Management Authority (Nema) to clean the river. They will also enforce relevant laws to prevent pollution by both individuals and organisations," he says.

Alima says the iconic project, the biggest in the country, will be a game-changer in the lower eastern region and will reduce dependency on rain-fed agriculture that has led to successive crop failures in the region.

"The project will facilitate irrigation of more than 100,000 acres of land creating food security. It will generate up to at least 20 megawatts of electricity and provide water to more than 1.3 million residents," Alima adds.

Senior Resident Engineer Pius Musis agrees with Alima and notes the dam, a flagship project for Vision 2030, will play a pivotal role in the achievement of the government’s Big Four agenda.

Musis says despite the challenges posed by the Covid-19 pandemic, the contractor, China Ghezoubha Group Company (CGGC) has made tremendous progress.

"Due to the pandemic, the contractor has been forced to work for 24 hours. The excavation of one of the diversion tunnels is 99 per cent complete while spillways works are at 97 per cent completion," he states.

The twin tunnels measuring an average length of 800 metres with a diameter of 12 metres will pave way for construction of the dam and the wall.

‘‘Once the water is diverted, the river bed will be left dry and we will now carry out excavation work for the dam and the wall," explains Mbaya.

He says once the dam is complete, the tunnels will be used as spillways and for releasing water for hydroelectric power generation, irrigation and domestic use.

"One of the tunnels will be used to discharge water from the dam and control flooding while the other tunnel will be fitted with two pipes, one to take water to the treatment plant and the other for hydropower,’’ adds the engineer.

Mbaya notes that the dam, being constructed one kilometre downstream from the confluence of rivers Thwake and Athi, will cover around 2,900 hectares in Makueni and Kitui counties.

And with the 80.5metre wall, with a length of 1.5 kilometre the backflow of water from rivers Thwake and Athi will stretch close to 10 kilometres upstream creating a lake-like reservoir with a capacity of 688 million cubic metres.

The dam will supply up to 150,000 cubic metres of water daily for domestic use and is expected to be the main source of water for the Konza Techno City.

So far, the progress of the dam, which was first proposed for construction in 1953 during the colonial days has generally been successful. 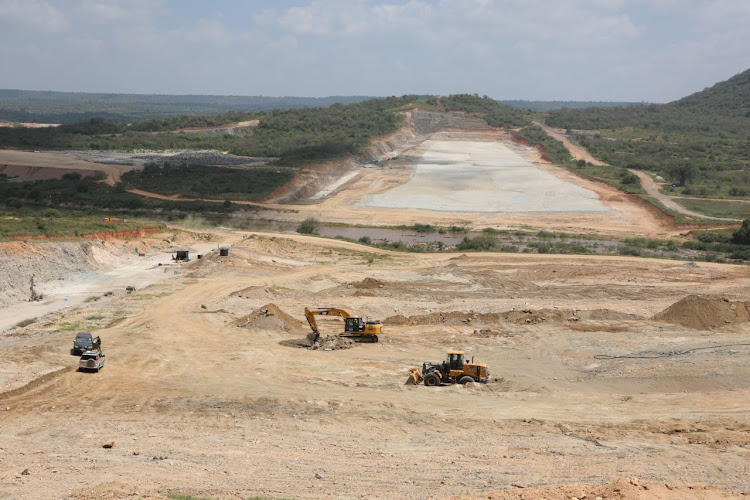 Out of the 1,792 Persons Affected by the Project (PAPs) only eight have not been compensated, mainly due to unresolved land disputes.

PAPs vice-chair Joshua Kiio says the project has uplifted the social-economic status for both PAPs and the local community.

"The area has become an economic hub, with booming businesses, thanks to the high traffic of workers to the site,’’ notes Kiio.

He adds that the majority of the PAPs built decent homes for their families after moving out of the project area.

"Others have been able to pay school fees for their children. Generally, the project has improved our well-being," Kiio said.

The Sh82 billion project is jointly funded by the Kenyan government and the African Development Bank and will be implemented in four phases.

Phase one which is currently underway includes the construction of the 80.5-metre wall, the reservoir and the rock-filled dam.

Phase two will comprise the installation of hydroelectric power generation while phase three and four will involve water supply and the irrigation component respectively.

CGGC deputy project manager Xing Wentao expresses confidence that the project will be complete within the stipulated deadlines.

"We are working round the clock to ensure that we recover the time lost due to Covid-19 and we hope to hit the timelines,’’ says Wentao. The first phase of the project is expected to end by November 2022, but plans are underway to have the timeline brought forward to January 31.