• Last June, former principal John Kombo left to pursue other interests and the school’s board of management appointed Babu to act as the new principal. 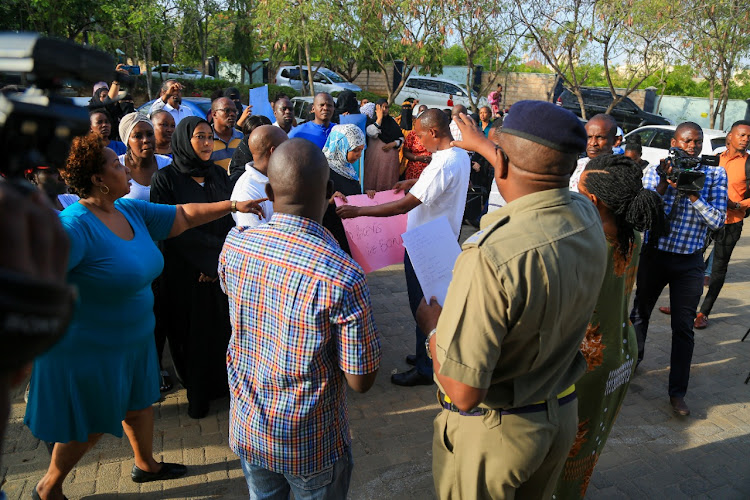 UNLAWFUL RECRUITMENT: Police officer tries to calm down a section of parents and stakeholders of Nyali School during a protest against the school new acting principal Toney Ogunga who was allegedly employed without following the due procedures on Tuesday, January 24.
Image: JOHN CHESOLI

Learning was on Tuesday morning disrupted at Nyali Primary School in Mombasa after a section of parents stormed the school demanding the removal of the new acting principal.

Officers from Nyali Police station were forced to intervene to ensure peace prevails as irate parents stormed the principal’s office to kick out Toney Ogunga, saying his recruitment was unlawful.

The parents, accompanied by other stakeholders and officials from Muslim for Human Rights said Ogunga should vacate the office immediately.

Nyali School is owned by the Mombasa Parents Club members. The parents said Ogunga’s recruitment went against the club’s constitution.

According to the parents, they were informed of Ogunga’s recruitment through the school chairman Benjamin Gitonga’s New Year circular.

Last June, former school principal John Kombo left to pursue other interests and the school’s board of management appointed Babu to act as the new principal.

Kaleli continued being his deputy.

However, the parents said Ogunga was recruited as deputy principal and has gone ahead to assume the role of the acting school principal.

“We are here to resist the actions of the board, through the chairman’s New Year circular, whereby we were informed of this new recruitment. The person has been employed illegally,” Huzeil Jill, a parent at the school said.

A row has been brewing over the recruitment of a new principal since the exit of Kombo.

Attempts by the board to recruit a new principal were thwarted after a section of members went to court to block the process, saying it was not open and competitive as required. 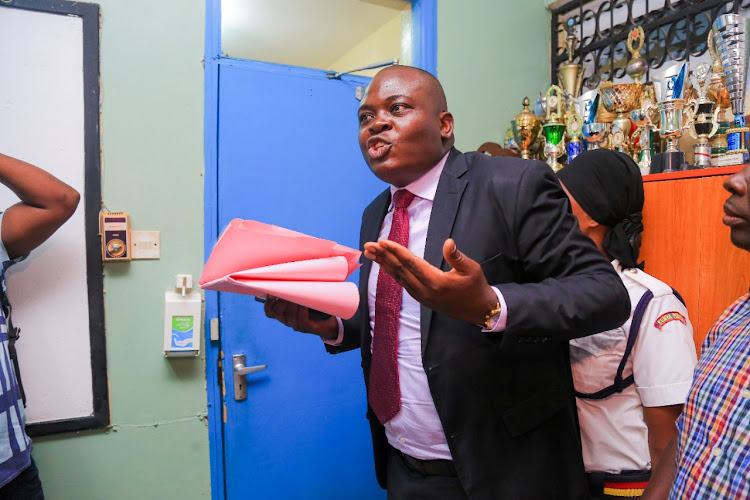 “It has now, however, come to the attention of members of Mombasa Parents Club that the board of management has secretly recruited a deputy principal, but who has been automatically rewarded with an acting principal role,” Jill said.

The parents now demand the secretary of the club, in a bid to resolve management wrangles in the school, calls for a special general meeting with a single agenda of appointment of an election board.

This will be to pave way for an annual general meeting and oversee the election of the new board of management since the current board has been in office since 2019.

They also demanded that Babu, who is already the substantive acting principal and whose appointment has not been withdrawn, be reinstated saying the school cannot have two acting principals at the same time.

“How can a new employee immediately acquire an acting role in a school with many potentials?” Dominic Mwangi, another parent said.

Mwangi said some individuals on the board were trying to bypass the law and using police to stop them from evicting an individual who was illegally on the club members’ property.

“The police brought here today should in fact escort us to remove the guy from our office. We own this school, not the board,” Mwangi said.

Ogunga however, refuted claims that he was hired illegally saying that due process was followed when he was recruited.

“I was not hired under the carpet as they allege, I was hired through a rigorous process. I went through interviews and I qualified, that is why the board gave me the mandate to act as the deputy principal,” Ogunga said.

“We are now having Junior Secondary School, and there are qualifications for one to head such a school, which I have. Therefore, the complaints they are bringing are neither here nor there.”

Ogunga accused the parents of being disrespectful to their children and teachers after storming the school to allegedly evict him.

“They all know they have a board managing the school, if they have issues they should not come and disturb the teachers and learners in school. They are supposed to go to the board because they know where they meet so that they can discuss their issues,” Ogunga said.

The school board chairman Gitonga said they followed the right procedure in the recruitment of Ogunga. He clarified that Ogunga is a deputy principal.

“We are asking those opposed to this new direction to remove the matter from court, to allow for an annual general meeting to take place so that we may conclude the process of finding a new substantive principal,” he said.

Kimana Girls tops with most improved KCSE results in Kajiado

Changes in the leadership of the school contributed immensely in turning around the results.
Counties
1 week ago

In another school, the staffroom was converted into a washroom and labeled 'Toilet.'
News
1 week ago
Post a comment
WATCH: The latest videos from the Star
by ONYANGO OCHIENG’
Coast
24 January 2023 - 18:05
Read The E-Paper