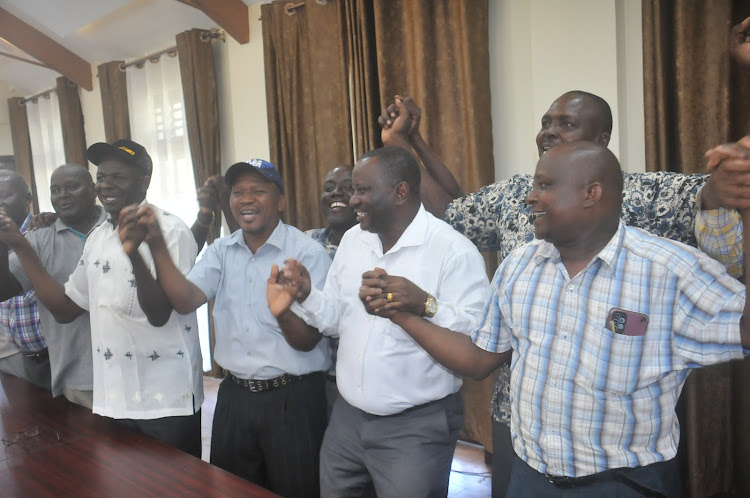 A section of Tharaka locals residing in Mombasa celebrating at the appointment of Kindiki Kithure as Interior Cabinet Secretary.
Image: LABAN WALLOGA

The Tharaka community living in Mombasa is in jubilation after it got its first appointment to Cabinet since independence through Professor Kithure Kindiki.

President William Ruto on Tuesday appointed Kindiki, a professor of International Law, to the powerful docket of Interior. He will be taking over from Dr Fred Matiang’i.

He had expressed interest to run for the Tharaka Nithi County governor seat, but later stepped down and focused on campaigning for Ruto’s presidential bid.

The former Tharaka Nithi Senator played a key role in the Supreme Court contest, having also served as President Ruto’s Chief Agent in the August 9 poll.

Kindiki was also among a team of 54 lawyers who represented Ruto at the Supreme Court.

On Thursday, the Tharaka Nithi Community in Mombasa expressed its gratitude to President Ruto for appointing their son, Kindiki to the cabinet.

Led by John Musia, the community has never produced a cabinet secretary before.

“We are grateful for the honour that the president has bestowed upon us, this is history in the making since he (Kindiki) will be the first Tharaka leader to join the cabinet. We expect that he is going to serve Kenyans diligently,” said Musia.

Musia further lauded the President for keeping the promises he made during the campaign period, saying that Ruto has demonstrated incredible leadership.

Mombasa-based Tharaka businessman Benjamin Gitonga also lauded the appointment of Kindiki, adding that he had no doubt that the former Tharaka Nithi Senator was up to the task.

“We are confident that the professor is going to deliver on his mandate, our prayer also is that they work together to make sure that the Bottom-Up economic model works and that hustlers in Kenya are happy,” said Gitonga.

He called on the President to further strengthen devolution, saying that it brought development and services much closer to the people.

Gitonga further addressed the issue of ethnic balance in the cabinet, saying that it is practically impossible to have all the ethnic communities represented in the cabinet.

“We have been in this country for the last 60 years and never had a Minister. The Constitution has limited the number of cabinets to 22 and you can imagine how many tribes are in Kenya. Today is Tharaka Nithi. Next time it will be another county,” he said.

He said that all the regions in the country were well represented, though not in equal numbers.

“Kenyans have a lot of expectations with the President and I trust that we will see better and improved government services.  All in all, we have to put in work ourselves, what the government needs to do is to make sure that they facilitate a conducive environment for business,” he said.

“We pray that God gives them the wisdom to lead this country to greater heights.”

Post a comment
WATCH: The latest videos from the Star
by ONYANGO OCHIENG
Coast
30 September 2022 - 21:12
Read The E-Paper