Funds will be used to buy machinery, PPE and create jobs.

Watamu Marine Association’s Eco-world recycling centre in Watamu, Kilifi, has got a Sh 7.2 million boost from Coca-Cola Foundation which will be used to buy a plastic recycling machine and protective gear. 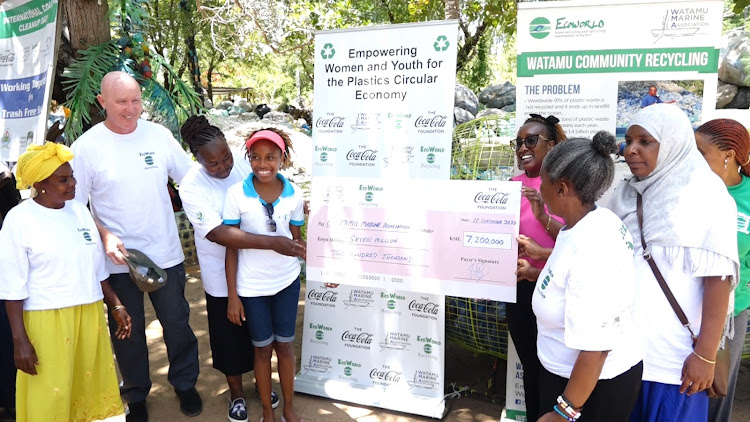 A conservation centre in Watamu, Kilifi, has received Sh7.2 million from the Coca-Cola Foundation to buy a plastic recycling machine and protective gear.

EcoWorld Watamu has been at the forefront of plastic recycling and solid waste management.

The funds are expected to boost its efforts, create jobs and promote conservation efforts on the beaches.

He spoke on Saturday while receiving the cheque from the foundation at the EcoWorld centre.

Trot said the project aims at empowering women and youth to embrace a circular economy.

He said this will create value chains and income for more than 500 women and youth. 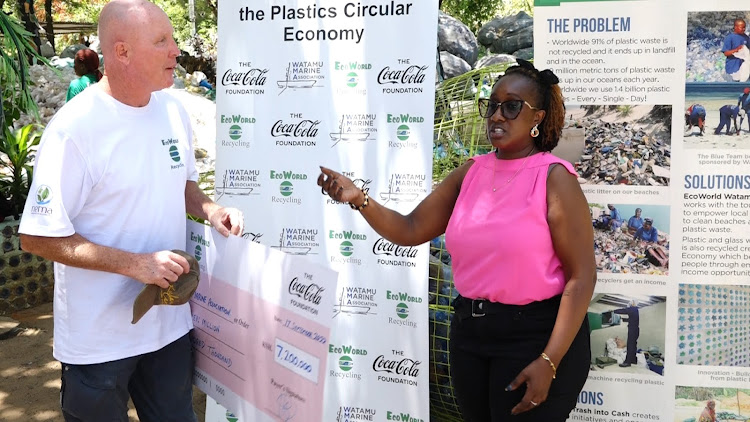 The official said EcoWorld will set up buy-back schemes to pay women and youth who collect plastic waste on the beaches, towns and villages.

He said they will be paid per kilo of plastic collected.

“We recruit, mobilise those teams and provide them with PPE, gloves uniforms and boots. They will be empowered to be plastic waste collectors and recyclers,” Trot said.

He said the waste will be taken to the recovery centre at EcoWorld and processed.

Trot said Sh6 million of the money donated will go towards buying the machine and the rest on PPE.

He said they usually collect around 20 tonnes of plastic a month but with the machinery, they are targeting 50 tonnes in Kilifi and Mombasa counties.

“This is going to be a game changer. It's going to change waste management effectiveness and capacity in our county," Trot said.

"It's going to create employment, income and the women and youth are going to be the drivers of this new plastic circular economy.” 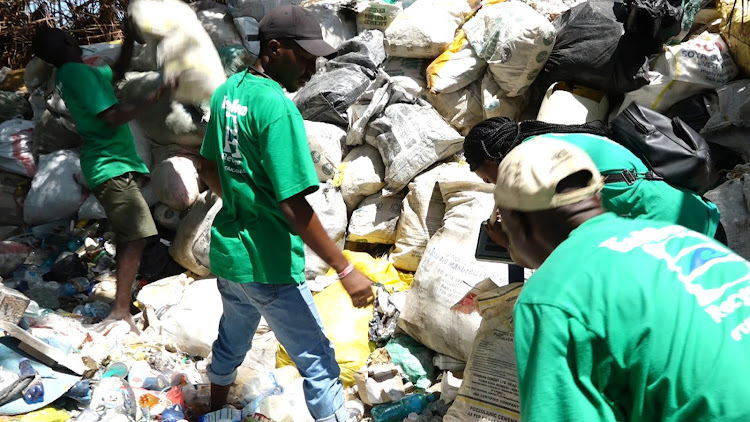 The official said they started the initiative 10 years ago with beach cleanup in Watamu Marine Park.

He said the initiative grew as the community, youth groups, hotels and KWS realised the value of plastic.

Trot said so far they have a recycling facility, vehicles, a management plan and work with all hotels, NGOs, and the county and national governments.

“Plastic waste is a global challenge. It's a challenge to our environment and our oceans but we are in the business of finding solutions," he said.

"The solutions include starting a plastic circular economy, to empower women and youth to collect plastic for recycling.”

Coast Bottlers' Pauline Mwaura, who represented the Coca-Cola Foundation, said the company's aim is to support the community.

She said the funds from the foundation will support women and youth to create a plastic circular economy.

She said the foundation funded a similar project in Mombasa county through WWF in March 2022.

She said as a responsible plastic producer, it's their responsibility to come up with such projects for the community.

"We can't just leave it to the society around us, we also have to participate. That is why we are honoured to partner with people like EcoWorld, WWF and every other forthcoming project," Mwaura said.

Kilifi director of environment Zena Mohamed said the project will benefit the community.

She said plastic is a global challenge and Kenya alone has more than 37,000 tonnes of plastic waste going into the ocean annually, which affects marine life.

Mohamed said such projects are important for job creation and environmental conservation.

He said EcoWorld has been supportive of plastic recycling in the marine protected area.

“I urge the community to work closely with EcoWorld and other organisations, to manage plastics,” Kiluhula said.

The warden said beaches in Watamu are clean because of the cooperation with the community, organisations such as WMA and other conservation groups.

Watamu Marine Association's Roseline Nabala said they are happy with the funding as it will help them get income.

“When we are empowered and supported we will be able to collect plastics daily," she said.

"The economy is tough and goods such as flour, which is going for Sh200, are expensive. However, by empowering a woman you are empowering a nation.”

Nabal thanked the Coca-Cola Foundation for the funding and asked the county and national governments to support them too in environment conservation and transforming lives. 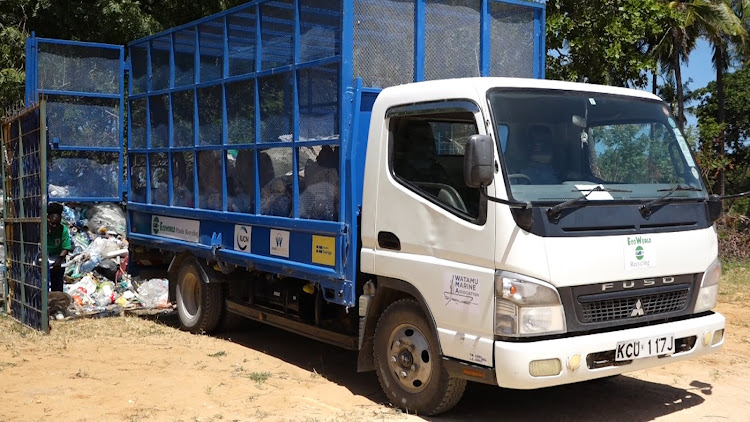 The Clean Seas Campaign is part of UNEP's broader work on marine litter and plastic pollution which contributes to the goals of the Global ...
News
2 months ago

It will address issues related to the ocean, marine conservation and sustainable development.
Counties
1 week ago

The insects decompose organic waste into manure and animal feeds.
Counties
1 week ago