The vessel was built by a Turkish company, Med Marine in collaboration with the Kenya Shipyards Limited 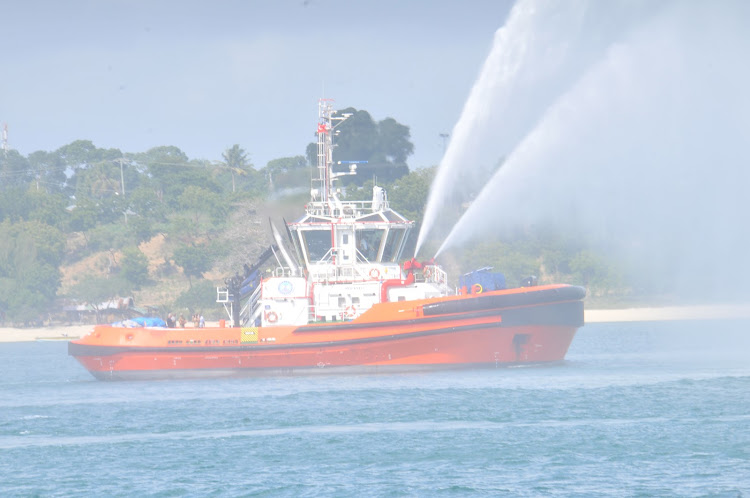 The Port of Lamu will soon begin tugging operations after the Kenya Ports Authority acquired a new tugboat on Tuesday.

Addressing the media, Kibwana said since the commissioning of the port last year by President Uhuru Kenyatta, they have been using equipment that had been transferred from the Port of Mombasa.

“With such an arrangement, we have also had to incur huge expenses from time to time whenever we ferry equipment from the Port of Mombasa to facilitate services such as pilotage and tugging,” Kibwana said.

The arrival of the tugboat from Turkey was marked with a harbor lap, salute and berthing at the Dockyard Jetty.

Kibwana said it was gratifying to witness the actualisation of the authority’s plans and efforts of equipping the Port of Lamu with its own equipment.

“The delivery of MV Pate Lamu is therefore a step in the right direction. The vessel’s capacity to handle port operations for all kinds and sizes of vessels safely, efficiently and effectively, gives us a sigh of relief. Her arrival is timely for the Port of Lamu,” Kibwana said.

The Azimuth Stern Drive tugboat was built by a Turkish company, Med Marine, in collaboration with the Kenya Shipyards Limited at a cost of Sh1.4 billion. It boasts of a bollard pull of 85 tonnes and a length overall of 29 metres.

Kibwana said the KPA board and management were cognisant of the importance of the Port of Lamu as a strategic facility in the region.

“Accordingly, the Board and Management have progressed plans to acquire more equipment in phases, parallel with the ongoing construction of the Port and its supportive infrastructure,” he said.

“For instance, besides this tugboat, we are expecting an additional three mobile harbour cranes to make a total of five for the port.

Mwangemi said the acquisition of the new tugboat was part of KPA’s development agenda.

The agenda is grounded on a strategic plan roadmap that guides the authority to anticipate emerging industry needs based on maritime trade trends and market needs.

He said KPA had embarked on robust equipping of the Lamu port to maximise its operational capabilities.

“The delivery of MV Pate Lamu Tugboat is part of the Port of Lamu’s marine vessels fleet, which will exclusively offer luggage services for vessels,” Mwangemi said.

He said that, Initially, the POL relied on the dispatch of tugs from the Port of Mombasa whenever a vessel called, contributing to high operational costs and time.

“The arrival of this tugboat is, therefore, a welcome relief as it would exclusively serve the Port of Lamu where it would be stationed permanently,” Mwangemi said.

He said due to her superior features, MV Pate Lamu shall be able to handle port and marine operations for all kinds and sizes of vessels safely and efficiently and is estimated to serve the port for a period of 20 years.

He added that KPA was also in the tendering process for the planned acquisition of a pilot boat and mooring boat to further streamline marine operations in Lamu.

“We now have a fleet of seven tugboats, four mooring and pilot boats, and a pollution control and security boat each. These developments give us the confidence to be able to market our services globally,” he said.

Mwangemi also said the Port of Mombasa recorded a steady rise in vessels, with an overall length of more than 250 metres with a carrying capacity of 6,000 TEUs in recent times.

He said a total of 1,635 vessels called the Port of Mombasa last year.

Last week, he noted, KPA hosted a delegation from the DRC keen to understand the workings of the Northern Transport Corridor and specifically the port facilities of Mombasa and the Inland Container Depots of Nairobi and Naivasha.

“We have also revamped the Port of Kisumu which since its renovations in 2018, has recorded a steady rise in cargo traffic to the neighboring Port Bell and Jinja in Uganda and Mwanza in Tanzania respectively,” Mwangemi said.

“With the planned commissioning of MV Uhuru II, we are optimistic that the volumes at the Port of Mombasa will increase markedly as a result. We are also looking to expand other small ports like Sio and Shimoni in Kwale."

Captain Rahman Aydin, who steered the vessels from Turkey to Kenya for three months, described the journey as tough on the rough deep seas.

"The monsoon season has high tides of up to between six and eight metres high. We had to use the Scotland route and make a stop at Abu Dhabi to refuel and stock up on food. We were a ten-member crew," Aydin said.

Ruto frequently and categorically said he will revert port services by an executive order.
Counties
3 months ago

Why I focused on infrastructure – Uhuru

Says it is an important determinant of economic growth, job creation and poverty reduction.
News
4 months ago