I quit politics for my personal life — Franco Esposito

Kenyan of Italian origin said at some point, a person must enjoy the fruits of his labour

• His big issue was education and his aspiration was to reduce the illiteracy rate that held back county development.

• He said the county needs clean water and electricity. 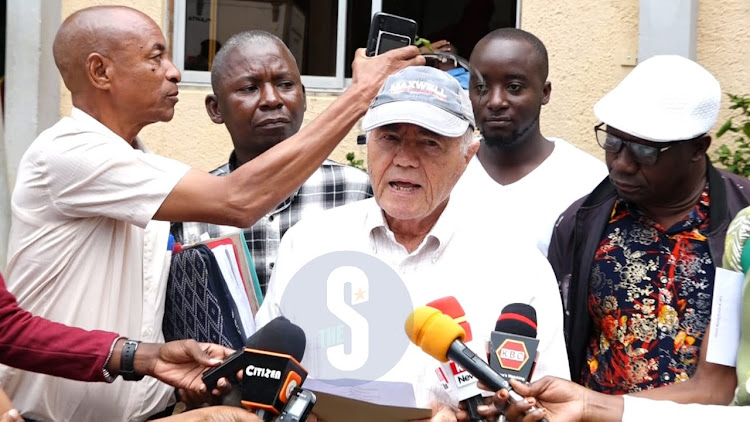 Franco Esposito the Kenyan Italian origin who was eying for the Kilifi Gubernatorial seat during a past press briefing after being cleared by IEBC./ ALPHONCE GARI

Franco Esposito, the Kenyan of Italian origin, is retiring from politics to enjoy his personal life after losing his third run for Kilifi governor.

Esposito, who is famously known as Kasoso Baya, was among the losers in the gubernatorial race won by ODM's Gideon Mung'aro who garnered 143, 773 votes,

Aisha Jumwa of UDA got 65,893, followed closely by George Kithi of the PAA party who garnered 64,326 votes.

In the results announced by IEBC on Friday night, Esposito, an independent, got 2,709 votes, while Michael Tinga of Ford Kenya who had earlier dropped his ambition in favour of Kithi got 2,864 votes.

Others are Alphonce Dzombo Mbaru of Safina Party (1,497) and David Noti Kombe who garnered 2,574 votes.

In an interview at his Woburn residence in Malindi, Esposito said he would continue with his work at his multi-million luxury property.

He said he was looking forward to a good tourism season to build his fortune.

"I think am going to retire after this, But I will remain in Kenya because it's my country I love it and I will  die here

"But I will dedicate more time to myself travelling a little bit as far as I can to see the world and eventually in the next few years retire," he said.

Esposito said he was selling his Woburn residence property but could not state the price, adding that immediately after election if there is a client willing to buy, he will sell it," he said.

Esposito said at one time in life a person must enjoy the fruits of his labour.

"I am selling it but am not in a rush. If I get a good proposal I will sell it," he said.

On the 2022 general election in Kilifi, he said it was peaceful and everything went smoothly in all the areas he visited in Magarini and Malindi.

"A few unfortunate things happened when I heard reports of vote buying, some people were found with ballot papers with some pre-organised ballots," he said.

The Italian said it was unfortunate  the elections were marred by a lot of voter buying by some candidates yet most residents of Kilifi  could not afford even Sh100 of flour.

Esposito said he was aware that Mungaro was leading and would emerge the winner followed closely by the other candidates. He knew he would lose after receiving the reports of vote buying.

"I hope the tourism will come back we have the first charter coming in Kenya from Italy full and they are coming to Malindi.

"This means employment so we look forward to what the elected candidates will do for the people of Kilifi," he said.

His big issue was education and his aspiration was to reduce the illiteracy rate, which was a drawback to development in the county.

"I hope those elected as governor, MP will focus 0n education .

"My motto was without education there is no future, children who do not go to school have got no chance to survive especially in this competitive world and therefore it is extremely important," he said.

The Italian said there is need to invest in clean water and electricity as most villages lack them.