•The Tsavo Conservation area has the highest concentration of elephants in the country, estimated at almost 13,000, according to the National Census Wildlife Report 2021.

•The report shows that Kenya has 36,280 elephants. 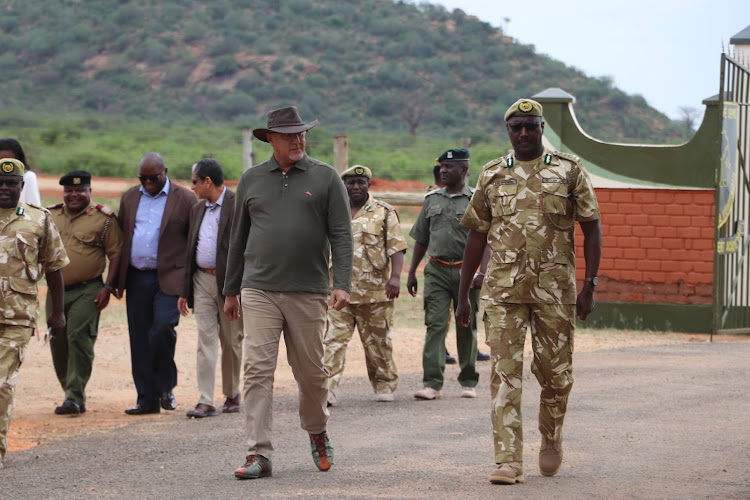 At least 78 elephants have died due to the effects of drought ravaging the Tsavo Conservation area, Tourism and Wildlife CS Najib Balala has said.

The numbers were recorded between July 2021 and April.

“We are losing a few elephants to illegal wildlife trade as compared to those dying due to the effects of climate change,” the CS said

He spoke on Friday during the presiding over of the passing out parade of 68 community rangers from 16 conservancies at the Kenya Wildlife Enforcement Academy in Manyani.

He said the government was putting in place measures to address the effects of drought bedevilling the region.

They include building at least 13 water pans at the Tsavo National Park.

The water pans, he said, would reinforce harvesting rain and floodwaters in the conservation area,  to enable wildlife to get water during the dry seasons.

“We have done afforestation of almost 200,000 trees inside the national park that is going to mitigate the effects of climate change,” Balala said.

The Tsavo Conservation area has the highest concentration of elephants in the country, estimated at almost 13,000, according to the National Census Wildlife Report 2021.

The report shows that Kenya has 36,280 elephants.

Others were Wildlife secretary Erastus Kanga and Taita Taveta county commissioner Lyford Kibaara among other officials.

He said the agency is in the process of changing its training curriculum to accommodate the training of community rangers and conservationists.

“The change of curriculum will be key in building a strong team that will enhance capacities for the changing dynamics,” he said.

He said plans are underway to construct a Wildlife boot camp at Law Enforcement Academy grounds that will help market Kenya as a key tourist destination.

He said the facility will host students and residents and train them on conservation activities.

Balala said the tourism sector was positively recovering from the effects of the Covid-19 pandemic.

“We estimate that we will fully recover from the effects of Covid-19 in 2024. This year, we are targeting to surpass the Sh157 billion revenue collected from the sector in 2019,” he said.

The CS said the tourism sector earned Sh137 billion in 2021, with more of the revenue coming from domestic tourists.

Like Maathai, the group of eight volunteers has chosen to plant trees to conserve environment.
News
7 months ago

Forest fires have in the past few days destroyed 16,000 acres of moorland in Mt Kenya.
News
8 months ago