Most enterprises don't understand their legal obligation to employees - Nyandusi

Nyandusi decried the fact that most of the employment in Kenya is in the informal sector which is less regulated.

• “We do follow up for most of the disability claims despite the challenges that are there.”

• He said Kenyans have to familiarize themselves with Kenyans laws and legislation. 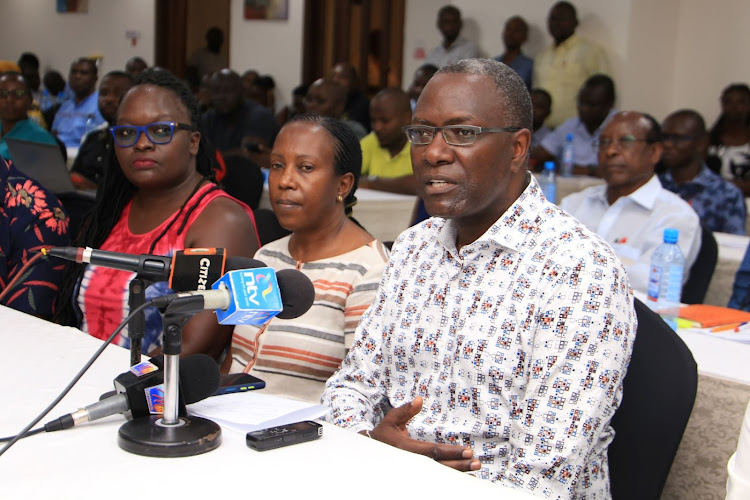 SAFETY FIRST Musa Nyandusi, the secretary of occupational safety and health at the Directorate of Occupational Safety Health Services in the Labour ministry, at a hotel in Mombasa on Wednesday.
Image: JOHN CHESOLI

Most enterprises, especially the small ones, do not understand their legal obligation to workers and the need for them to embrace their safety and health at work, the Ministry of Labour has said.

Speaking at the end of the fifth National Occupational Safety and Health conference in Mombasa, the secretary, Directorate of Occupational Safety Health Services in the Labour ministry, Musa Nyandusi on Wednesday said this results in tags of war between families of victims and enterprises when tragedy strikes.

“The legal framework exists and our institution is very strong in implementing this but of course we understand that there are a lot of challenges in terms of the compensation of workers,” he said.

The conference was held ahead of the World Safety and Health.

Nyandusi said though it is a daunting task to ensure all enterprises are familiar with the laws and regulations that govern safety and health at work, they are up to task.

“We do follow up for most of the disability claims despite the challenges that are there.”

A steel factory in Thika on March 27, was on news headlines after one of its workers Caleb Otieno, 34, slipped and fell into a boiler and his body was melted into a pulp that mixed with the liquefied metal.

Nyandusi said they launched a probe into the incident as a department and the probe is ongoing.

“There are a lot of compliance issues that were found there for which we are working with the enterprise to correct," he stated.

“But principally, this worker died in the course of his duty, and our first issue was to ensure that his dependants and family is compensated in accordance with the law,” Nyandusi said.

A row erupted over the compensation Otieno’s family with his employers who had offered Sh7,000 a month for five years. Otieno earned Sh21,000 a month.

“The law provides that this worker is compensated his gross monthly earnings for 96 months, which is eight years,” the secretary said.

He said his department will ensure that the family gets it the bare minimum.

“He may have other benefits in terms of what he should have been paid upon termination of his employment depending on what his employment was which should also be due to him.”

Nyandusi said compensation is prescribed by law and there is no way a company can alter how one should be compensated in case a tragedy occurs.

He said Kenyans have to familiarise themselves with these laws.

“We have 30 offices across the country and we are represented across all the 47 counties. Our offices conduct risk mapping on all work places where there are risks,” Nyandusi said.

He said the department is heavily involved in fire training in regards to fire reduction rules, and conduct of training and sensitisation of workers.

“The same legislation requires that in any enterprise or workplace where we have 20 or more people we have a safety and health committee,” said Nyandusi.

This means the committee must constitute the management, ownership and the workers. They are required to meet at least four times a year and be able to have an ongoing health and safety conversation.

“It is a legal requirement and we actively pursue that,” he said.

The committee is expected to be trained in occupational safety and health.

Nyandusi said medical examination of workers is a must for employers both at the beginning of employment and at the end to help the employer understand the state of their worker’s health when being deployed.

“If they are exposed to certain risks, then the department expects that they shall be undergoing periodic medical exams, usually annually,” he noted.

However, Nyandusi decried the fact that most of the employment in Kenya is in the informal sector which is less regulated.

He said the government is slowly encouraging the informal sector to formalise so as to be able to enjoy such services offered by the Directorate of Occupational Safety and Health Services.

Family of man who melted in steel boiler offered Sh7,000 monthly as compensation

The amount will be offered for a period of five years.
News
7 months ago

During COVID-19 pandemic both government and non-governmental organizations reported that women and girls were particularly vulnerable.
Business
8 months ago
Post a comment
WATCH: The latest videos from the Star
by BRIAN OTIENO Correspondent, Coast Region
Coast
29 April 2022 - 19:56
Read The E-Paper