The Taita MP is a Jubilee leader, while the governor is aligned to ODM, despite being a Wiper party member 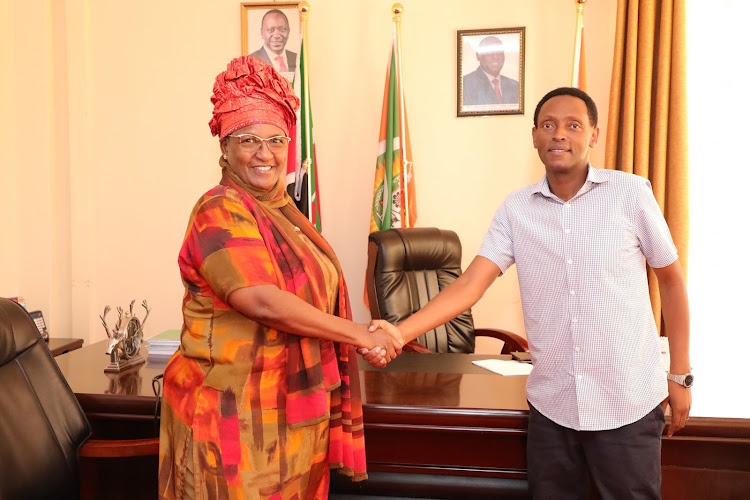 Their unity, which seems to be focused on the 2022 general election, has stirred uncertainty in the county over the possibility of joining forces to defend the gubernatorial seat.

Shaban is a Jubilee leader while Samboja is aligned to ODM, despite being a Wiper party member.

The new union between the two has sent other gubernatorial candidates back to drawing board to strategise on winning the Taveta votes.

Speaking at Msengoni ECD grounds in Taveta on Sunday during a thanksgiving function for the Mahoo MCA-elect Donald Fundi, the duo affirmed their support for ODM  leader Raila Odinga’s Azimio la Umoja team.

“My sister and I have decided to start the journey of popularising the Azimio la Umoja in this region. This movement is going to sweep everybody opposed to the unity of the nation,” Samboja said, further terming the Mahoo by-election win as the birth of Azimio La Umoja in the county.

The first term governor has for the last one week intensified his campaigns across the county to popularise his administration. Samboja is set to battle it out with eight other hopefuls in the next year’s general election.

Samboja who has since left Wiper for ODM, said he is confident of defending his seat, claiming that he had met his 2017 manifesto.

“My administration has delivered what we promised our people. From water to education, health care and infrastructure,” the county boss added.

In unanticipated turn of events, legislator Shaban endorsed Samboja’s administration for what she termed as achieving great performance in the sectors of water, agriculture and infrastructure.

“I have been working closely with Samboja for the benefit of the county. This new pact is ready to defend the seat,” the MP said.

In the past years, Shaban and Samboja, have been embroiled in a supremacy tussle to control the county.

However, their new found camaraderie, people say might be their new strategy to solidify both Taita and Taveta votes ahead of election.

“Samboja deciding to work with Shaban, is the hardest stab to his opponents. Shaban is a seasoned politician, she just doesn't make such decisions overnight,” former Taita Taveta Woman Rep Joyce Lay said.

Lay took to her Facebook page to ask other governor hopefuls to take their time in doing civic education, and engage one-on-one with the people.

She said Shaban has shown undying spirit in the past elections hence being the longest serving MP in the country.

“Don't underestimate her moves. Her win is personal and for her bosses. She always delivers on their behalf, she is an institution,” Lay added.

“The governor is desperately fixing everything to defend his seat. Bringing Shaban onboard as a running mate could possibly be one of his strategies. With politics, anything is possible,” Musyoka said.

Post a comment
WATCH: The latest videos from the Star
by SOLOMON MUINGI
Coast
20 December 2021 - 22:00
Read The E-Paper