LUCKY TO BE ALIVE

Kenyans acted fast to rescue the bus driver and his assistant

• On Monday, MV Safari stalled on the Likoni mainland side of the channel.

• This caused a massive congestion as only two ferries were left in operation. 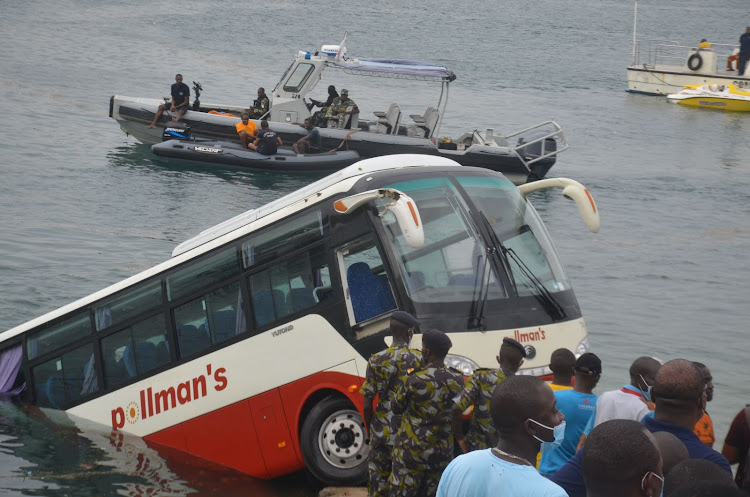 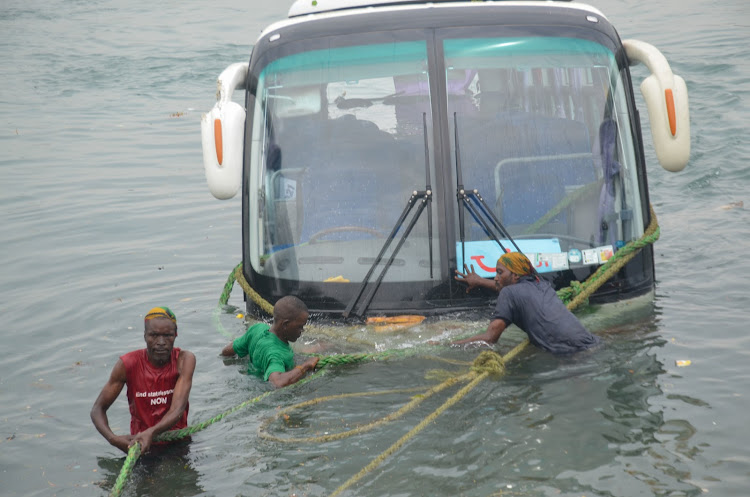 The near tragedy at Likoni crossing ferry on Sunday brought back memories of past tragic events on the channel.

A Pollmans Tours and Safaris bus slid off the ramp at 10.45am on Sunday owing to the heavy rains being experienced in the area. The driver was attempting to board the ferry MV Jambo. There were only two people on the bus, the driver and his assistant. Both were rescued and the bus salvaged.

The incident brought back memories of Mariam Kigenda, 36, and her four-year-old daughter, Amanda Mutheu. The two died on September 29, 2019, after their car slid off the prow of MV Harambee midstream at 6.13pm.

It took 13 days to recover the car and the bodies of mother and daughter. During the 2019 rescue efforts, the Kenya Navy and private divers clashed, slowing recovery efforts.

But on Sunday, no such incidents were witnessed. It seems Kenyans do not want to see another death on the channel.

Ferry users risked their lives to save the Pollmans crew. One user dived into the water from the ferry in a bid to reach the two in the sinking bus.

Another could be seen running into the water from the ramp.

Ferry users threw life jackets and floaters into the water for the two as others encouraged the two to jump off the bus.

Two fishermen in a boat could be seen rowing their way to the sinking bus, encouraging the two occupants in it to get into their boat. They rowed them to safety.

They tied ropes to the bus and the rope, from the Island, was pulled by Kenyans, who encouraged one another to pull the vehicle out of the water.

On Monday, MV Safari stalled on the Likoni mainland side of the channel.

This caused massive congestion as only two ferries were left in operation.

“This place needs prayers,” Sophia Abdi, a Likoni resident who was inconvenienced by the incident, commented on the social media pages of the KFS.

But for how long will Kenyans witness such incidents?

On December 4, Transport CS James Macharia, while inspecting the new Sh1.9 billion Liwatoni Floating Pedestrian Bridge, said the bridge is only a temporary solution to the Likoni channel problem, which now includes the danger of the spread of Covid-19 owing to the large numbers of commuters using it.

Another permanent bridge, the Mombasa Gate Bridge, which will cost Sh210 billion, will be constructed on the channel to connect Mombasa Island to the mainland side at Likoni. Macharia said this is a permanent solution to the Likoni ferry crossing channel challenges.

The Mombasa Gate Bridge will be 70 metres high to allow ships to pass underneath.

"The bridge is being designed as we speak. The design will be completed by June 2021," the CS said.

Construction is scheduled to start in December and will take four years to complete. This means Likoni motorists will have to put up with the ferry challenges up to at least 2025.

The project will be undertaken by the Kenyan government in collaboration with the Japanese government through the Japan International Corporation Agency.

For now, a significant number of the 300,000 commuters who use the ferries daily will have to use the Liwatoni floating bridge to ease congestion at the Likoni crossing channel.

The floating bridge will be dismantled once the Mombasa Gate Bridge is complete.