Community members earn money from trash collected from the beach which poses a threat to marine life. 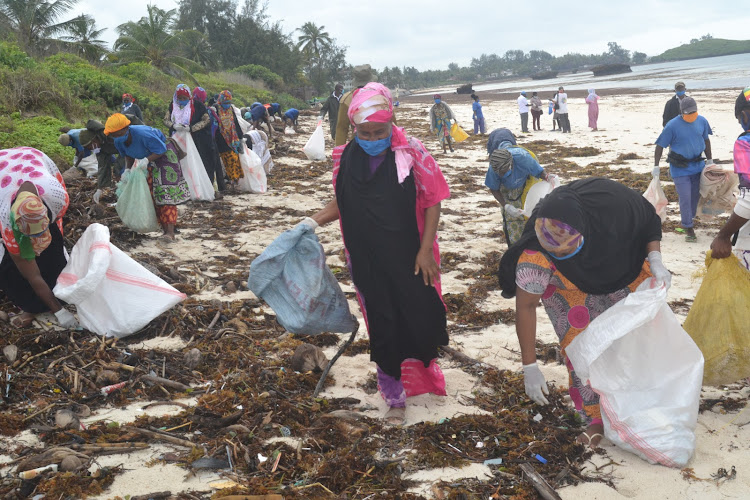 Conservationists in the tourist resort town of Watamu in Kilifi county have launched a programme of buying waste collected from the beaches to help conserve the ocean.

The trash-for-cash project organised by stakeholders including KWS and conservation groups is managed by Watamu Marine Association. It is aimed at supporting locals who have lost their livelihoods following the coronavirus outbreak.

Watamu entirely depends on tourism and most workers lost their jobs after hotels were shut in March.

The conservationists spoke on World Oceans Day in Watamu during a cleanup exercise at the beach attended by Stephen Katua from Nema.

Karen Njue, the assistant project coordinator of the Water Management Authority, said the project was initiated to support the community by buying trash collected from the beaches.

Speaking at Turtle Bay beach she said they issued a call to donors around the world and within the country to donate money to empower the community economically and at the same time conserve the environment.

She said plastic pollution was a major problem in the marine environment.

In May, she said, they managed to support 471 people who collected 8.5 tones of plastics and marine litter in Watamu.

Njue said most of the waste collected from the beach included hard plastic pieces of 10 to 100 centimetres, bottles and bottle tops.

The Nema official said he was impressed by the programmes initiated by stakeholders to safeguard the marine protected areas and promised to support them so as to protect the marine life and ensure the environment was clean.

He said due to the Covid-19 pandemic the World Oceans Day celebrations were done virtually but he decided to attend the cleanup to see what the community in Watamu was doing on conservation of marine life.

"Watamu Marine Association is doing very well. It has worked well with government agencies because they are doing something practical," he said.

Katua said the initiative of buying trash had supported the community during the difficult times of the pandemic.

Dadley Tsingayiu, the warden at Watamu Marine National Park, said the trash for cash programme raised Sh0.5 million to help in cleaning the beaches and ensure the locals remained engaged.

He said most residents depended on tourism, adding that in Watamu the sector was affected with 99 per cent of the hotels having closed town.

He said the crime rate had gone up and exploitation of the marine resources such as fishing in protected areas had begun to rise due to the Covid-19 pandemic.

"Logging of mangrove is also on the rise. We organised with the local community to provide something small for their survival so that as we try to fight the pandemic they are able to clean the beaches and get paid," he said.

Tsingayiu said the residents go to the beach to collect trash which is weighed by WMA  and they get paid to enable them to buy food for their families.

Matilda Mathia, a community member who has worked with WMA for the last 10 years in collecting trash in the beaches, said the conservation project has been of help to them.

Supa Roseline Nabala, a resident of Watamu, said she was happy to be part of the beach cleaning team which helps to protect marine species.

"Today being World Ocean Day we are happy to clean the beaches, we are celebrating because even if there is coronavirus we don't fail to clean and at the same time get income from it," she said.