Over the years, few or none from Coast region was given the coveted title of Mashujaa

• Muhuri's Khelef Khalif, who fought off the grabbing of Mama Ngina land 20 years ago, says he was not even invited for Mashujaa day.

• Among those recognised are Mzee Ngala, a Bango music composer. 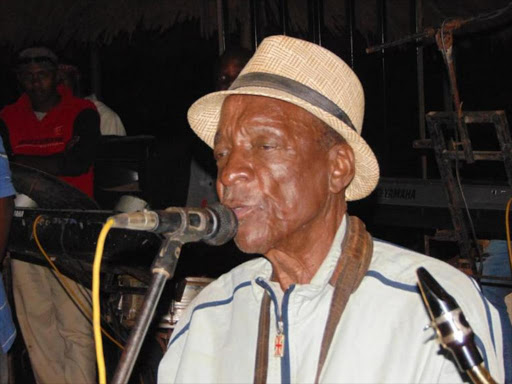 Unlike the previous Mashujaa Day events where very few or none of the Coast people featured as heroes, this time round at least 12 residents made it to the list.

The celebrations were held for the first time in the historic and refurbished Mama Ngina Waterfront Park, bringing the town life. President Uhuru Kenyatta and hundreds of other dignitaries attended.

More than 200 Kenyans were feted. Besides the 12 Coast residents, several others from the region also featured under the special categories, sports and freedom advocacy.

Mzee Ngala, a renowned Bango music composer, writer, saxophonist and performer was one of the notable names. He was honoured for his contribution to the development, promotion and revolutionisation of the music industry.

Last week, Mombasa Governor Hassan Joho visited him at his Kisimani home. The musician had just celebrated his 84th birthday.

Mwanatumu Abdalla, also from Mombasa, was honoured for being at the forefront in volunteering to cook for political prisoners jailed during the fight for Independence.

Abubakar Bajaber was celebrated for being a philanthropist and a role model for his involvement in entrepreneurship and industry.

Of note, however, was that the person who was instrumental in stopping the grabbing of the back was left out. Khelef Khalifa, 70, is now the Muslim for Human Rights (Muhuri) chairman. He saved the park 20 years ago.

"Special invitations to Mama Ngina grounds were not extended to civil societies who saved the park from being grabbed. The truth of the matter is, I wouldn’t attend the function where Uhuru and his sycophants are intentionally killing Mombasa and the Coast economically through the standard gauge railway,” Khalifa said.

During the groundbreaking ceremony at Mama Ngina in January, Khalifa was recognised by Uhuru and Joho for his efforts to fight for the restoration of the park. The president and the county chief said it was a brave act since those were the days former President Daniel Moi wielded immense power. The Special Branch officers had even threatened to throw him into the sea off Nyali Bridge, he was not deterred.

"Some of the people who wanted to grab the land are at Mama Ngina, such an irony,” Khalifa said.

Amina Musau from Kwale was celebrated for her efforts in initiating numerous community development projects and championing the rights of the less fortunate in society.

Also from Kwale was Boga Iddi, who was honoured for his unwavering efforts in promoting education through the establishment of a number of schools and his involvement in campaigns against radicalisation of youth.

Kilifi’s Kenga Mkare was recognised for his efforts in enhancing education by paying ECDE teachers for over two years, donating land for the construction of Uhuru Primary School.

Judith Johana was celebrated for promoting peace and being an advocate of the vulnerable and a source of inspiration to girls and women.

Tana River’s Titus Komora was noted as a spiritual leader with high integrity and one who uses intercultural sports tournaments to preach and promote peaceful co-existence.

Other honorands included Sadia Hussein from Tana River — a passionate anti-FGM crusader. Raya Ahmed from Lamu was celebrated for her involvement in community development.

Mohammed Kheri was one of the sports heroes. He was the first indigenous coach to take the national team Harambee Stars to the African Cup of Nations. He was at the 1988 and 1990 tournaments.

Others included Hasmukh Patel, a philanthropist known for refurbishing schools, hospitals and police stations, helping the disabled and feeding the poor.  He has so far done 73 institutions in Mombasa county, including more than 20 schools and several police stations.

Enock Ondego of the Mwakigwena Choir is now blind. His choir sang about the tribulations founding President Jomo Kenyatta went through, imprisonment and release.

And despite stereotypes and notions that the region does not produce ‘brains’, it also boasts of scholars such as Prof Mohamed Hyder.

Three years ago, one of the most renowned scholars, Ali Mazrui, died, and residents regretted he never got a chance to serve Kenya.

In the past, key national figures from the region included Ronald Ngala and Mekatilili wa Menza who were involved in the Independence fight.

The late Meza Galana, who was the composer of the national anthem, also died and was buried in November 2015 in Tana River.