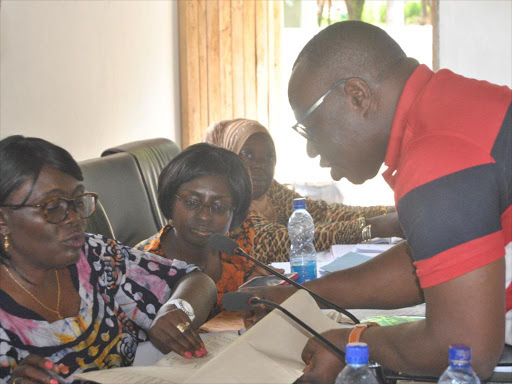 Retired lands officials should be probed for allegedly grabbing land at the Kilifi Jimba and Chembe Kibabamuche settlement schemes in Kilifi county, an MP has said.

The officials, who include retired senior provincial administration officers, land surveyors and land adjudication officers, own multiple pieces of land within the schemes, which were meant for residents.

Some of the officials have already developed their land in the prime area of Watamu, earning millions of shillings.

Kilifi North MP Owen Baya took the National Land Commission to task over the illegal acquisition of land by government officials and demanded they be charged with fraud.

At one time, Baya engaged the NLC commissioners led by acting chairperson Abigael Mbagaya in a war of words when he demanded the prosecution of all the officers mentioned for abusing their offices.

He told NLC to investigate and recommend charges against all the officials who allocated themselves land at the two controversial schemes.

The lawmaker also told the commission to revoke all the titles which bear the names of land adjudication officers and surveyors who fraudulently obtained land that was to be allocated to locals.

Others who engaged in illegal land acquisition include tycoons who colluded to obtain tittle deeds years after an embargo was placed.

Some of the parcels have more than four tittle deeds and each of the parties claim ownership.

Since Monday, the commission has been holding public hearings in the Kilifi Jimba scheme to identify real land owners and lift an embargo that was placed by the government 31 years ago.

Baya, who has been attending all the sessions of the hearings, challenged the commission to revoke all the tittles of the officers, who he said were well-known and give back the land to the locals.

Further, he said the officers should be charged with fraud for illegally acquiring land which has led to the land injustices. That is why a sale embargo was imposed by the government in 1987.

On Thursday, hundreds of squatters at the Chembe Kibabamuche scheme held a peaceful protest against what they said was a planned eviction.

The area in Watamu, Kilifi, has 440 parcels. On Tuesday, NLC boss Mbagaya said they are done with the scheme. She said 90 per cent of the land was cleared, a caveat removed and a Gazette notice issued on July 17.

The NLC chairperson said they would soon issue a notice of demolition to evict squatters who invaded private or public land.

“Invading private land without authority of the owner cannot make you the owner. Even if you build a flat it will be demolished,” he said.

The squatters have, however, maintained they will stay put.

On Thursday, the squatters said they were denied the right to own land. They marched carrying placards and twigs along the Jacaranda route.

They said they had lived on the land for more than three decades and deserved to own parts of it.

They accused the commission of siding with absentee landowners and grabbers.

Chembe Kibabamuche is one of the controversial government schemes. At some point, a caveat was placed over some parts. It was later lifted.