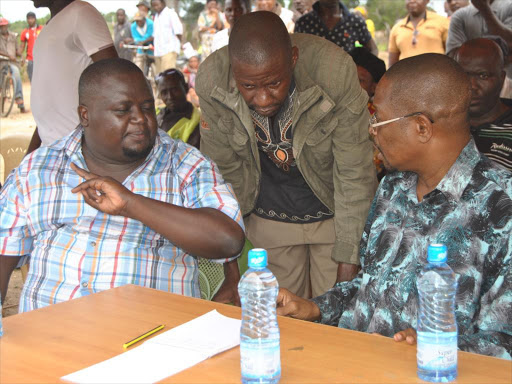 Sabaki Ward MCA Edward Delle with one of the squatter Stembo Kaviha have a word with Kilifi Senator Stewart Madzayo during a meeting with Sabaki ADC squatters in Magarini sub county on Saturday March 3./ALPHONCE GARI

Two politicians from Kilifi county have said they will use any means to reclaim the 900-acre Agricultural Development Corporation grabbed land.

Senator Stewart Madzayo and Magarini MP Michael Kingi said they are ready to shed blood to ensure justice prevails for the Sabaki people who have been rendered squatters in their land in Magarini subcounty.

The ADC land was allegedly allocated to influential government officials and tycoons at the expense of the locals. They gave out the land for Agricultural purposes more than five decades ago.

Madzayo said the Sabaki ADC land was not part of the Tsavo national park, but an area where residents have lived and will be buried. He spoke at a meeting with the squatters and the Kilifi county assembly Committee on Lands.

The team aimed to end the perennial land issue. The senator said the grabbers were allocated the ADC land and have so far shown no interest in developing the area. They only wanted to acquire wealth.

Madzayo said Sabaki people have to get back their land. He assured them he would use his connections, knowledge of the law and justice to help the residents.

The senator said it is sad to see companies allocated huge chunks of land within the ADC plot, owned by the locals. “Any historical injustice against the people of Kilifi will be paid for. Every Kenyan has a right,” he said.

Madzayo urged President Uhuru Kenyatta to ensure the ADC land in Sabaki is given back to the people. The senator asked the MCAs in the Lads committee to file a petition to the Senate speaker for action to be taken. MP Kingi said the Sabaki ADC project collapsed and the land should be given back to the people. “We shall not allow the land to be taken by tycoons. We are aware the land was allocated to individuals a long time ago,” he said.