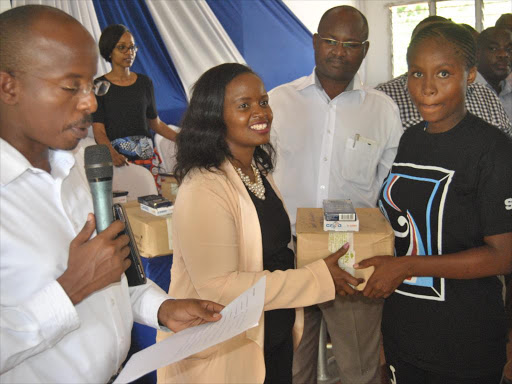 Fred Murimi the Managing Director of Centum Capital , with Centum Strategy Manager, Elizabeth Munga awards beneficiaries of 2016 scholarships who perfomed well in their examinations at Pwani university during the ceremony to awad 50 new scholarships on November 14./ALPHONCE GARI

Centum will next year, begin the ground breaking for the first phase of a multibillion mega city in Vipingo, Kilifi county.

It will entail the development of a vocational training centre. Centum has promised give scholarship to residents upon enrollment.

The project is expected to turn Kilifi into a top investment hub.

Residents will be given first priority in employment, Centum promised. Centum managing director Fred Murimi said they will embark on infrastructure development and put up roads, electricity and water.

“We are breaking ground for the project in early 2018. We invite other investors to build industries, businesses, hotels and other investments,’’ Murimi said on Thursday. He spoke at Pwani University during the launch of the second phase of the Centum Foundation Vipingo Development Scholarship Fund.

Speaking during the launch of the second phase of the Centum Foundation Vipingo Development Limited Scholarship Fund and Prize Giving Day at Pwani University on Thursday the MD said they are inviting other investors to come and set up their investment.

As per the plan the Vipingo mega city will be designed to have industrial parks, business centers, hotels and many other investments.

“We are breaking ground for the project in early 2018, we intend to set up infrastructure, roads, electricity, water, we invite other investors

to come and build industries, businesses, hotels, and other investments,’’ he said.

On scholarships he said they intend to reach a target of 200 students benefitting per year in 2019 so as to enable the local’s access education and benefit in the opportunities at the new city.

Last year he said they offered 50 scholarships in their program and managed to offer the same number this year.

to award scholarships to Kilifi South Sub County Candidates who excelled in KCPE, the program started last year we offered 50 scholarships for four years , today 50 others are benefitting ,’’ he said.

The MD said the corporate social responsibility program was in line with the new mega city’s strategy to help locals and their key focus was on the education.

and give scholarships on the same adding that they are also building 360 classrooms in 14 primary schools in the sub county ,’’ he said.

Each year he said they intend to spend Sh. 20 million for the scholarships in the program that helps bright needy students.

Last year he said they targeted candidates who had scored 300 and above but due to the improved performance they increased to 350 marks.

However he said those who applied were over 500.

The scholarship initiative was launched in 2016 in collaboration with two communities in the Vipingo region; the Mjuma and the Bambani Kilio communities.

The beneficiaries were selected based on KCPE performance, level of need and leadership skills. Best performing scholars from the class of 2017 were awarded form 2 textbooks, mathematical sets and calculators.

Briggite Nyevu Charo a beneficiary who will be joining Mama Ngina girls’ high school could not hide her joy upon getting the scholarship and promised to fulfill her dreams of becoming a doctor.

Nyevu who scored 395 marks hailed Centum for their initiative saying it would empower the standards of living for locals and reduce poverty.

Joel Amani Mramba said the scholarships had opened doors which were closed as his parents could not afford the costs of facilitating his secondary education.