Say construction of the road was abandoned months ago and their villages have been cut off as it is impassible.

• The road starts from Kiambu and snakes through Murang'a before ending in Nyeri.

• The project follows the routes followed by Mau Mau fighters as they went in and out of the Aberdare Forest to fight colonialists. 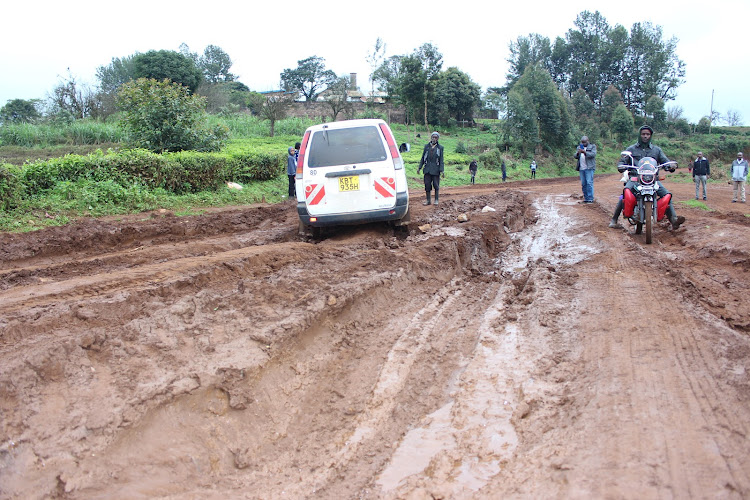 A vehicle stuck in the mud on Mau Mau road in Kiruri, Kangema constituency, on September 18, 2022.
Image: Alice Waithera

Murang'a residents living in areas where the Sh30 billion Mau Mau road passes have cried out to the government to complete the project.

They say construction of the road was abandoned months ago and their villages have been cut off as it is impassible.

The road covers 540km from Limuru in Kiambu, passes through Murang’a and ends in Nyeri county.

The project follows the routes followed by Mau Mau fighters as they went in and out of the Aberdare Forest to fight colonialists.

The majority of the areas bordering the forest have had a poor road network and the government started the project as a way of honouring the Mau Mau fighters.

In Ichichi village, Kangema constituency, villagers said the wet weather being experienced in the area has made roads inaccessible.

The area has been experiencing drizzles that make the roads slippery. The area's hilly terrain aggravates their condition.

Paul Kamau, a resident, said just walking from his home near Maragua tea buying centre to Ichichi shopping centre is a gruelling task. 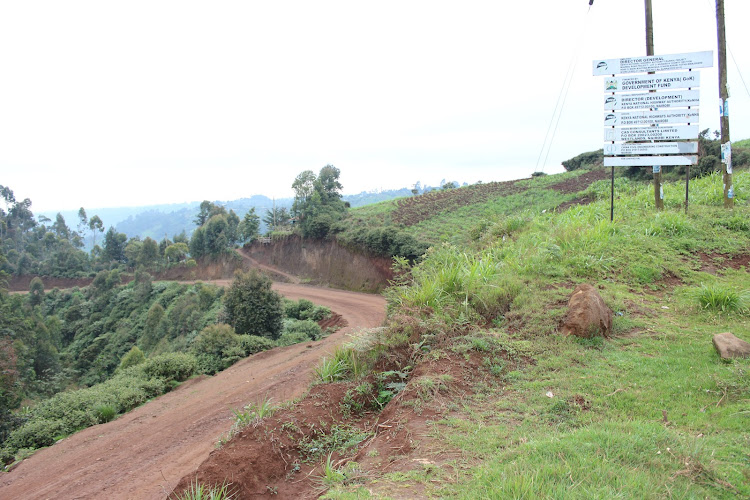 Kiruri Ichichi road that is part of the Mau Mau roads project in Kangema and whose construction works have stopped.
Image: Alice Waithera

“By the time you get to the centre, you are so muddy and tired, and coming back home is even worse because it is going down the hill,” he said.

Kamau said they carry sick relatives on their backs as the area has become inaccessible to vehicles.

The road has clear skid marks left by a few brave motorists, most with off-road vehicles, as they slide dangerously down the road to Maragua river bridge, where the government has constructed one of the three intakes for the Northern Collector tunnel. The collector tunnel is expected to boost water supply to Nairobi.

“If I want to leave the village and maybe go to Kangema town, I have to go through Gatara village in Kiharu constituency. I wish they graded it to a level where it would not be degraded by the weather,” he said.

Ruth Nduta, another villager, said the most distressing thing is taking patients to hospitals, especially at night.

When going to Nairobi, Nduta explained that the villagers wait for a bus that arrives at 2pm.

“Please complete the road so that we stop suffering. It takes so long for us to travel to other areas,” she said, noting that most residents prefer not to leave the village unless they have to.

In the nearby Mathioya constituency, residents of Kiamuturi and Mioro areas are facing a similar predicament.

Wariira Mugi, a villager, urged the new government to address their plight and have the road completed. 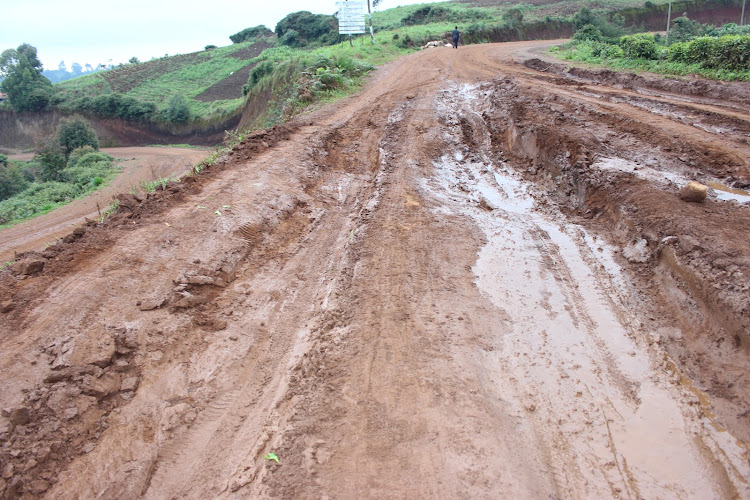 Huge trenches on the Mau Mau road project in Kiruri, Kangema, that have rendered the road impassible.
Image: Alice Waithera

“The current state of our roads has ground our lives to a halt. They are so muddy that we all have to wear gumboots to use them,” he said.

Mugi said the project is noble and has the potential to transform their lives once it is complete as they will open the areas near the Aberdare Forest to tourism.

Mary Wanjiru said tea farmers are struggling as tea collection trucks get stuck on muddy roads, forcing them to sell their tea leaves at night.

She said the poor state of the road has made their lives even harder since it has caused a spike of commodities’ prices in their areas as transporters overcharge them.

Before the project, the routes were mainly footpaths that were being maintained by tea factories to ease collection of tea leaves by the trucks.

In November last year, Kenya National Highways Authority chairperson Wangai Ndirangu said 10km of the 153km stretch it is constructing in Murang’a as part of the 540km Mau Mau roads project had been tarmacked.

Kenha also has plans to establish museums in the four counties as a way of conserving their cultural heritage and in a bid to document the history that led up to Independence to remind Kenyans of the cost of their freedom.

One of the historical sites that will be exposed by the road was where freedom fighter Dedan Kimathi was captured by colonialists.

In Murang’a, the county government has set aside 10 acres and the project will cost about Sh250 million.

It begins in Limuru, Kiambu, and traverses Nyandarua and Murang’a ends at Ihururu in Nyeri.
Counties
9 months ago

Stakeholders accuse Kenya Power of taking too long to act, interfering with smooth construction of the road.
Counties
10 months ago
Post a comment
WATCH: The latest videos from the Star
by ALICE WAITHERA Correspondent, Murang'a
Central
19 September 2022 - 22:00
Read The E-Paper