Muthoni was in fifth position in this year's election out of 10 candidates, with 1,150 votes.

• Flasiah Muthoni was born with one blind eye while the other lost sight while she was in Standard 6.

• The Sh300,000 she used in her campaigns does not bother her. She will use the experience to better prepare for a seat in the 2027 elections. 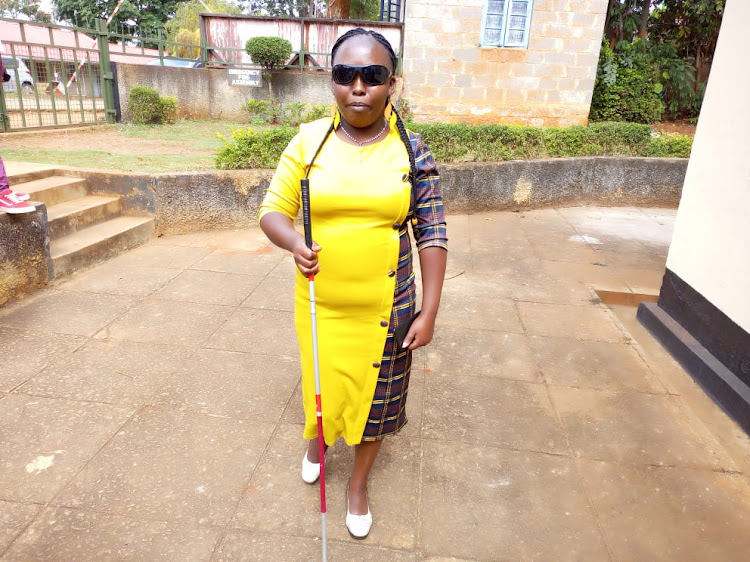 Flasiah Muthoni Mwangi was born a healthy and bouncing baby girl but soon after her birth, it became apparent that she was blind in one eye.

She also had visual impairments in the other eye.

Muthoni, a playful and witted girl, had to wear spectacles from an early age. She joined Kongo-ini Primary School in Kiharu constituency up to Standard 6 when her other eye failed and she had to undergo surgery to remove it.

Life as she knew it was over and had been replaced by total darkness.

Her friends in primary school did not know how to interact with her anymore and shunned her altogether.

“After 10 years as a spectacled girl, many of my friends could not handle my transition to a blind person. Our neighbours also segregated my parents. They had very little support through such a difficult time.”

Her parents eventually enrolled her in Thika Primary School for the Blind where she had to learn to use braille.

Learning afresh was so hard that she was tempted to drop out altogether. Learning to use braille felt like she had gone back to nursery school.

She learnt the alphabets and numbers within three months, which encouraged her to continue learning. 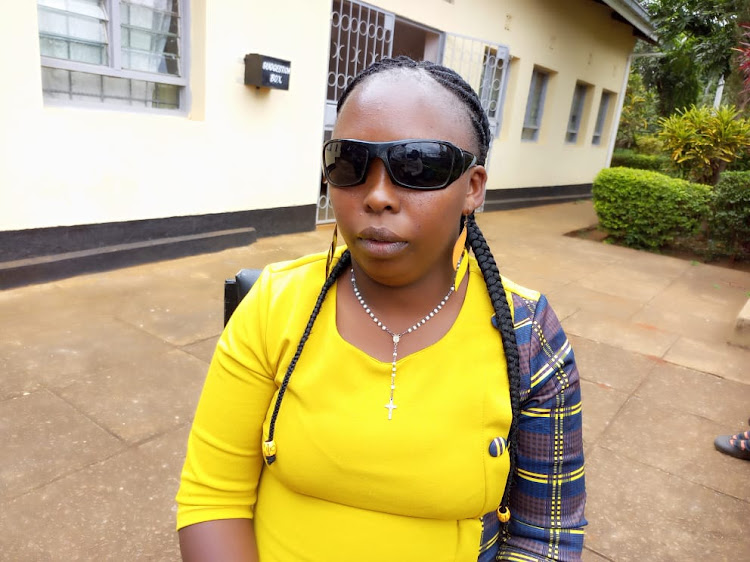 Flasiah Muthoni during an interview with the Star on August 27, 2022.
Image: Alice Waithera

After her secondary education, she joined Machakos Teachers Training College but she dropped out and decided to pursue an agriculture course at Baraka Agricultural College in Molo.

She later undertook a diploma in the same course and is currently in her first year at Jomo Kenyatta University of Agriculture and Technology pursuing a degree.

Muthoni is now a mother to a five-year-old.

She said while suckling her son, she would always miss his mouth and the boy learnt early on to hold on to the breast and put it into his mouth.

“Now, he is always quick to point out if there is any object on my path while I am walking. He has adapted to our life,” she said.

Being blind has turned her into a strong-willed person that fights for what she believes in, and she uses it to encourage others living with disability to fight for their space and become self-reliant.

She said she uses Google Talkback on her smartphone to use social media platforms like WhatsApp and Facebook.

Muthoni describes herself as a natural-born politician, saying she was a fan of former Kiharu MP Ngenye Kariuki but her parents did not like her political side.

When she insisted on engaging in politics, her parents had no choice but to support her.

She got nominated to vie for Murang’a Township ward through Safina party and started the journey of seeking votes.

Without sufficient funds, Muthoni had to trek through the ward talking to residents and would sometimes use boda bodas. 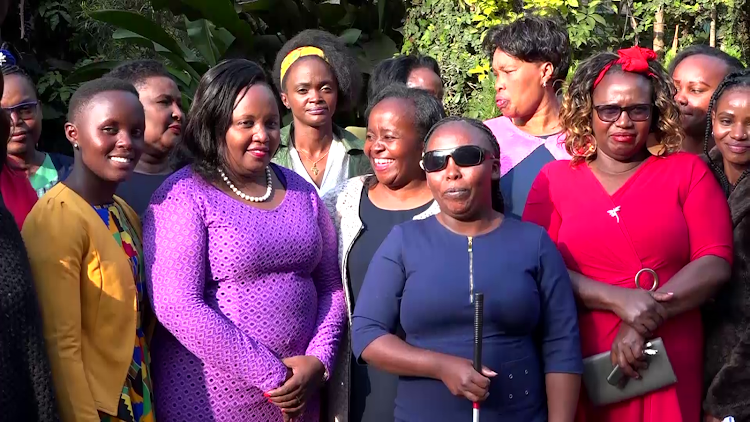 Flasiah Muthoni (in sunglasses) during a meeting with other women aspirants when they called on new Murang'a governor Irungu Kang'ata to work with them on August 23, 2022.
Image: Alice Waithera

“My campaigns were not conventional because I did not have money. I would talk to people on the streets and sell my vision”.

She braced for the unfriendly treatment she knew she would receive from some members of society as some told her to her face that she could not be a leader because she is blind.

“It did not dampen my zeal but I had a hard time convincing people that being disabled does not mean one cannot perform. They forget that what is only lacking in me is sight but all my other faculties are in place. We’re also human. We just have physical deformity.”

Muthoni said society should learn to embrace people with disabilities as some take them for granted because they are different.

Though her competitors slighted her, Muthoni ended up in fifth position in the elections out of 10 candidates, with 1,150 votes.

The Sh300,000 she used in her campaigns does not bother her. She will use the experience to better prepare for a seat in the 2027 elections.

But she made an appeal to elected leaders to ensure seats set aside for PWDs are filled in a free and fair manner.

“Why not give them to people who have already shown their interest to lead locally? Why are they given to strangers?” she posed.

Had she won the MCA seat, Muthoni planned to use the forum to empower other PWDs and ensure they have opportunities to better their lives.

She also planned to introduce a motion to have Marikiti market in Murang’a town pulled down and replaced with a modern structure that would host more people and have the required sanitary facilities.

Murang’a town, she said, should be a 24-hour economy to boost residents’ earnings. She also had plans to help establish a park for lorries that scatter all over the town.

Muthoni urged political parties to support PWDs to vie for positions to help them achieve their dreams.

“Even if we don’t pay parties, the lack of support locks out many PWDs who have limited means.”

To support her son, Muthoni opened a company through which she applies for tenders with the help of a business partner. It also pays for her university fees.

She said it is time for PWDs to show the people around them that being disabled is not the end of life and they can do anything done by others.

She urged parents with disabled children to support them as much as possible to help them become independent.

They said they want convenience while voting and to ensure secrecy of their ballot.
Counties
3 months ago