Chamomile is grown organically and does not need spraying or fertilisers

• A 50kg bag of fertiliser has more than doubled from about Sh300, some months ago to Sh6,000. The same applies to other farm inputs.

• Chamomile is a flower with a range of health benefits. It is used in making herbal tea and is believed to make a person relax and sleep. 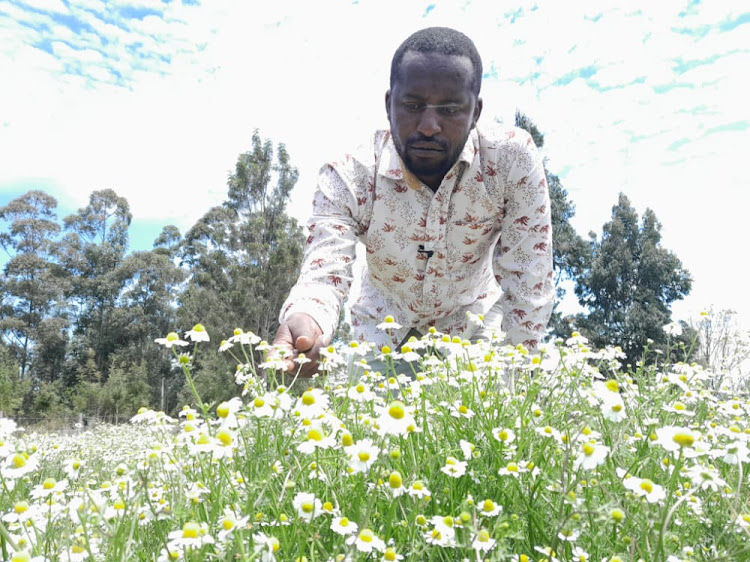 High costs of farm inputs have driven a Nyeri farmer into chamomile farming.

A 50kg bag of fertiliser has more than doubled from about Sh300 some months ago to Sh6,000. The same applies to other farm inputs.

This has prompted farmers, like Moses Karimi Githaiga, to diversify and venture into growing crops with low production costs.

Githaiga, who has put part of his land at Kiawala in Kieni West subcounty, Nyeri county, under chamomile, sells the flowers to tea processors.

It is grown organically and does not need spraying or fertilisers, making it very economical to grow.

One does not need big capital to start as it only involves buying of seeds, preparation of land, watering, manure and harvesting.

He said buyers have been importing the plant but are ready to buy from him if he keeps growing it.

Initially, Githaiga was growing garlic but is now planning to put more of his land under chamomile.

“At the moment the demand for this flower is high than the supply. I recently had an order to supply 100 kilos but I only managed ten kilos,” he said.

Since he was only growing chamomile on trial bases, he had only put an eighth of an acre under the plant. 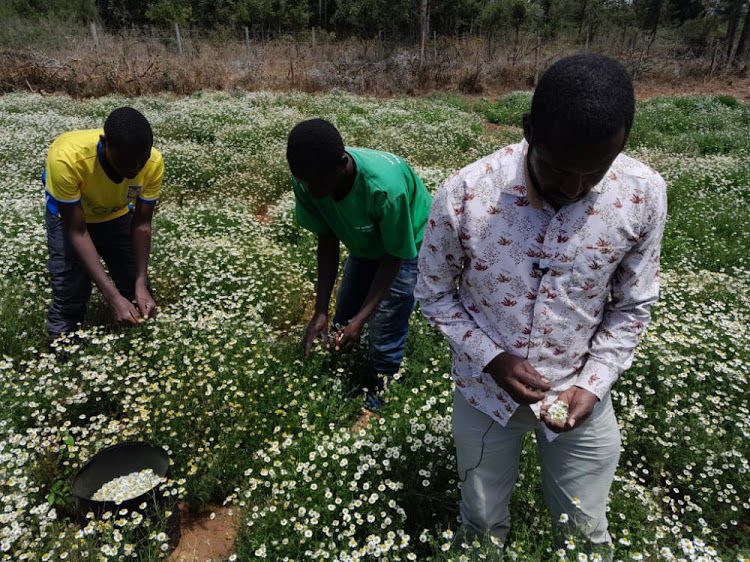 However, his ultimate goal is to put about four acres under the flower plant, when he has enough seeds to cover that size of land.

“I have done trials and realised it can do well here. The market is also good and consistent, so I want to grow it on a large scale,” Githaiga said.

Chamomile is a flower plant with a range of health benefits and is used in making herbal tea.

It has a chemical known as flavonoids, which has medicinal effects.

The plant, taken as a supplement, is believed to make a person relax and enable those who suffer from lack of sleep to get some.

“We are a total of ten farmers growing this plant countrywide and we bought the seeds from Germany,” Githaiga says.

The plant was introduced in the country three years ago despite being grown for thousands of years in other parts of the world.

Githaiga however says Kenyan farmers have not been growing it due to lack of knowledge and information on how to go about it.

To grow it, he says the seeds are first planted in a nursery seedbed until they are ready for transplanting in a month’s time.

It is usually ready for harvesting two months after transplanting and can be harvested for four months before being replaced.

Chamomile is harvested thrice in a week by plucking the flesh flower, just like pyrethrum. The flowers are dried in a greenhouse until they are ready for the market. 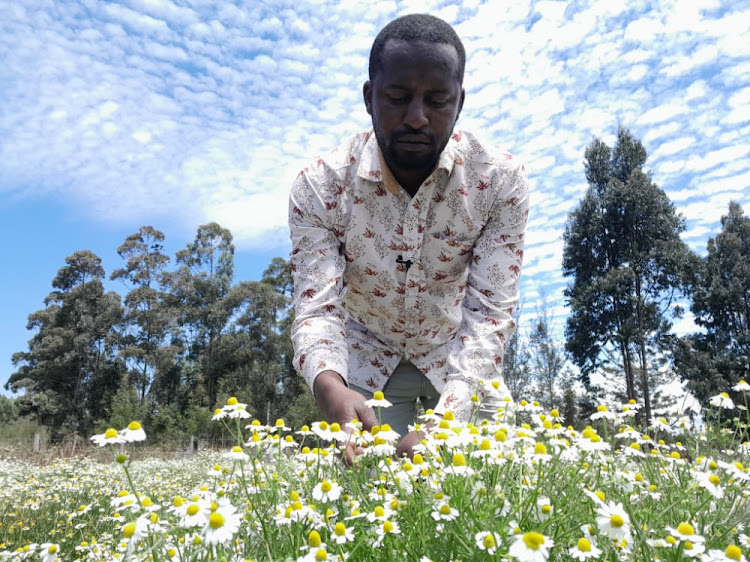 “The beauty about this plant is you do not need acres of land to plant it. You can even plant it in an area of about one square metre and earn good money from it,” Githaiga said.

With good husbandry, an acre can produce 10 to 15 kilos of the dried flower per day.

To use it one cooks tea normally with all its other ingredients, which include boiling water, tea leaves, sugar, milk then add the dried flowers.

The plant is labour intensive only during harvesting, which is done regularly. It also requires watering for maximum flower production.

A kilo of garlic goes for Sh200 per kilo despite the high production cost involved.

He encourages farmers to plant chamomile and is ready to provide them with seeds.

It reported Sh341.3 million in net earnings
3 months ago

The agency is supporting farmers diversify and also training them.
Counties
9 months ago