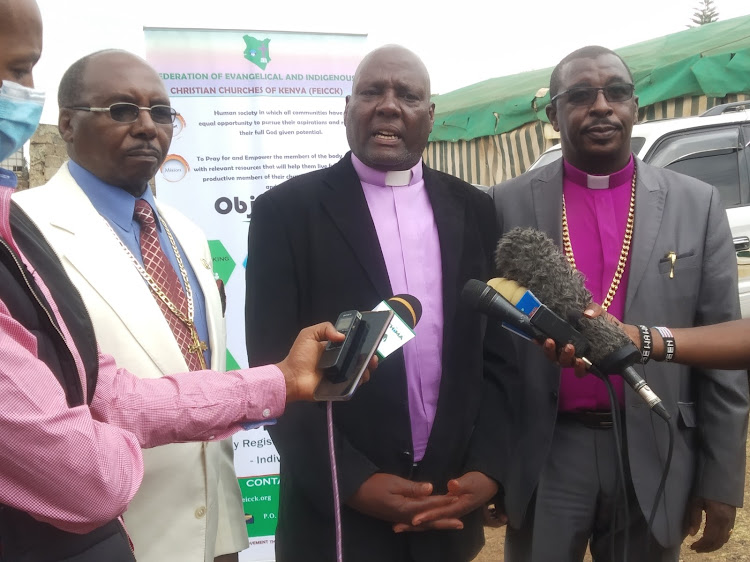 Some clergymen have called on the Mt Kenya Foundation to meet all presidential aspirants and give them a fair chance to outline their agenda for the mountain.

The clerics, under the Federation of Evangelical and Indigenous Christian Churches of Kenya, want the foundation consisting of tycoons from the Mt Kenya region, led by Equity Bank chairman Peter Munga, not to lock out any presidential hopeful.

The foundation has already met with ODM chief Raila Odinga and One Kenya Alliance principals, including Kalonzo Musyoka, Gideon Moi, Musalia Mudavadi, Cyrus Jirongo and Moses Wetang'ula. They discussed their agenda for the vote-rich region.

The clerics told the foundation that they never know who will be voted in as the fifth president of Kenya and therefore urged them to open doors for other hopefuls including Deputy President William Ruto, National Assembly Speaker Justin Muturi and Murang’a Governor Mwangi wa Iria.

“Even those who have not been called to the meetings have a following and you never know about tomorrow. It is wise to hear out everyone who is in that race,” federation chairman Bishop Samuel Njiriri said.

They spoke during the federation’s leadership, partnership and prayers summit at Glory Outreach Assembly Church in Kahawa Wendani, Ruiru.

The foundation has come under fire from the presidential hopefuls who have not received their invite, including Ruto.

The DP on Sunday dismissed the meetings, saying the tycoons were only cutting political deals in hotels at the expense of residents, adding that he was not interested in boardroom meetings.

Ruto also accused the foundation of cutting deals that only favoured them and their business empires while disregarding the plight of poor citizens.

“Those who will decide on who will be the next president are the voters and not a few tycoons sitting in hotel meetings,” he said.

Speaker Muturi, who is also eyeing the top job, joined the DP in castigating the Mt Kenya Foundation, saying it was irrelevant and inconsequential for a group of individuals to meet and purport to vet aspirants on behalf of voters.

Muturi, who spoke on Sunday after a church service at St Paul's ACK, Kiambu, said he will engage voters directly “as it’s the voters who will choose their leaders”.

Usawa Kwa Wote party leader Wa Iria scoffed at the foundation, saying it will have no impact on the next general election.

He took issue with the foundation for not inviting him to its 'interviews', yet he is from the Mt Kenya region.

“They snubbed me in 2013 and 2017, but I still defeated them. I will still defeat them. Why haven’t they invited me, yet they have seen my posters all over, am I not good enough to be invited?"  he posed.

The clerics, however, uphold that every aspirant should be heard and be allowed to campaign in all parts of the country.

The foundation, after meeting Raila and OKA principals, has retreated and is yet to announce the hopeful it will support.