• Say some rogue politicians might be planning to cause anarchy in the country ahead of next year’s general election.

• Caution that the flare-ups might spill over to the elections, if not tamed. 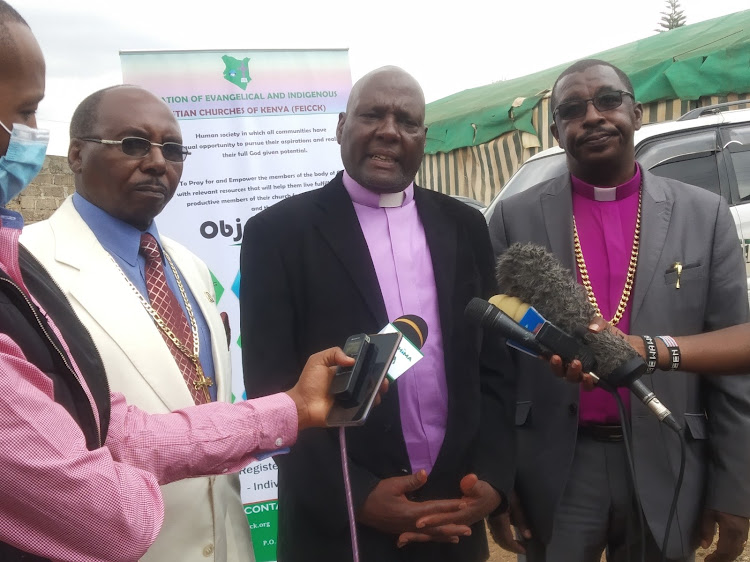 A day after three people were killed in a fresh attack in Laikipia, some clerics have raised the alarm that the clashes might be politically instigated.

The gunmen, who had driven hundreds of animals from homes in an attempted cattle theft near Laikipia Nature Conservancy in Laikipia West, opened fire indiscriminately, killing three and injuring one on Sunday evening.

Despite the major security operation in the region, the heavily armed bandits emboldened by their weaponry and their understanding of the terrain are still wreaking havoc, leaving a trail of destruction behind.

Clerics under the Federation of Evangelical and Indigenous Christian Churches of Kenya on Monday warned that political forces might be fuelling the clashes, which have displaced hundreds of locals from their homes, left property torched and hundreds of animals stolen.

Led by the federation patron bishop James Kamata, the clergymen said some rogue politicians might be planning to cause anarchy in the country ahead of next year’s general election. They cautioned that the flare-ups might spill over to the election if not tamed.

“We are very concerned by the ongoing clashes in Laikipia West that seem to be targeting a certain ethnic community. We believe politics might be the root cause of the conflicts and that some rascal politicians are behind them"

"Security agencies must move with speed and tame the anarchy from the roots because it is detrimental to the country’s peace ahead of the general election,” bishop Kamata said.

Kamata called on authorities, including the National Cohesion and Integration Commission, to crack the whip and tame rogue politicians out to cause chaos in the country.

“We do not want to see incidences of bloodshed during the campaigns and electioneering period. We want peace to prevail and the relevant authorities mandated to maintain sanity in our country should move with speed and avert such incidences,” Kamata said.

Federation general secretary bishop David Munyiri Thagana warned politicians against engaging in divisive and confrontational politics ahead of the polls, saying it’s a recipe for chaos.

Thagana said it was disheartening to witness reputable politicians in the country spewing personal spats against each other on podiums and in rallies.

“We are tired of seeing our leaders taking jibes and maligning each other in public. We want them to bring their agenda that is helpful to Kenyans instead of the insults and smear campaigns,” Thagana said.

The clerics also cautioned youths across the country against being misused by politicians to cause violence as they seek to achieve selfish political interests.

“Don’t sell your future and your lives to politicians with bribes. It is high time youths rose to the occasion and made informed and wise decisions by supporting visionary leaders who have the best interests of our country at heart,” Thagana said.

The clerics also called on Kenyans to turn up for voter registration so that they can vote for their leaders of choice.

Bishop Samuel Njiriri said all churches under FEICCK will be giving civic voter education to their followers to educate them on the importance of being eligible to vote.

“We also welcome Independent Electoral and Boundaries Commission clerks to visit our churches and conduct the registration from there. As the church, we are ready and determined to give guidance to our people as they seek to elect their leaders into office,” Njiriri said.

Disarm bandits or we all get guns, Baringo residents tell state

MCA questions how a government can allow 'uncivilised people' to overpower its systems.
Counties
1 month ago

How misinformation was spread in Laikipia clashes

Misinformation has been spread through social media.
News
1 month ago

Clashes in Laikipia are all about ethnic identity, the claim to origin and land ownership
Siasa
1 month ago
by JOHN KAMAU Correspondent
Central
12 October 2021 - 21:00