She left Murang'a for Nairobi in 2004, 'lacked fare' to return

• She left in search of a job, twice got married and ended up with five children 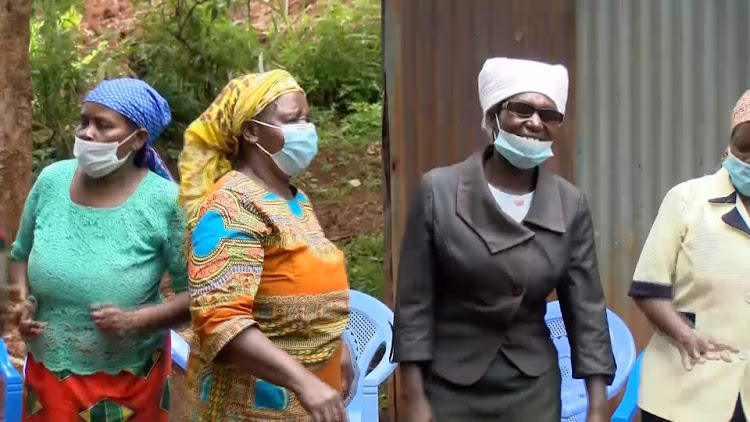 A middle-aged woman who disappeared from her parent’s home 17 years ago has returned home, claiming lack of fare could not allow her to visit her parents.

The family in Kagaa village, Kahuro subcounty, termed the comeback of their daughter Milka Muthoni an Easter blessing from God.

Muthoni, who showed up with a young child, narrated that after she went to Nairobi in 2004, she got married but the marriage was rocked by domestic violence.

She told villagers who milled at her parents’ home that due to numerous challenges, she could not get fare to return to her home.

After completing her Class 8 education, she opted to get a job in the city, where she did menial jobs before meeting her first husband, who hailed from Narok county.

“I stayed with my husband in Nairobi for a short period and opted to go and stay at his rural home,” Muthoni said

“At the outskirts of Narok town, things got worse during the 2007 post-election violence. This prompted us to leave our rural home and go stay in Narok town.”

She added that things did not go well as her husband turned violent and most of the time, she was chased to sleep outside. In the marriage, Muthoni was blessed with three children.

“The marriage was rocked by many wrangles and I opted to escape but my husband by then shielded the children, denying me a chance to escape with them. I moved to Nyeri to be hosted by a friend in 2011,” she said.

In Nyeri, she embarked on small jobs and in the process, she got another husband. They moved to his rural home, where they constructed a house and started a new life.

In the new marriage, Muthoni said she was blessed with two children. Unfortunately her husband, who was a driver, was jailed in connection with theft.

“My husband, who was a driver, was arrested in Mombasa after stolen goods were found outside his rental house. He was not lucky as he was jailed for two years. In 2019, the conviction ended,” Muthoni said.

The mother of five further faced challenges while her husband was in jail. Some people torched her house after she blamed them for stealing her chicken.

“Problems followed me since we were left with nowhere to stay. I opted to put up a makeshift shelter, but when my husband was released, we constructed a semi-permanent house,” she said.

Muthoni said many times, she missed going to see her parents, and her children, who had become of age, would ask why they never visit their upcountry grandparents like children of their neighbours do.

Last Sunday, she got some Sh3,000 and made up her mind to go back to her parents’ home, even though she did not remember the place very well.

Her mother and family members could not hide their joy for her coming back, adding that they had not yet given up on searching for her as no report on her death had been brought to them.

Muthoni encouraged people with lost relatives or friends, saying some of them could just be in deep struggles but will eventually come back one day, just as she did.

“We will now be visiting home henceforth together with my husband and children. The children I left in Narok are under the custody of their father. I don’t know if one day I will see them,” she said.