TO HELL AND BACK

• Peter Nanjelo was strolling in Nakuru town in 2001 when cops said, 'Ndio huyu'

• Next thing he knew, he was being asked to admit to robbery with violence, not knowing it would doom him to the death penalty 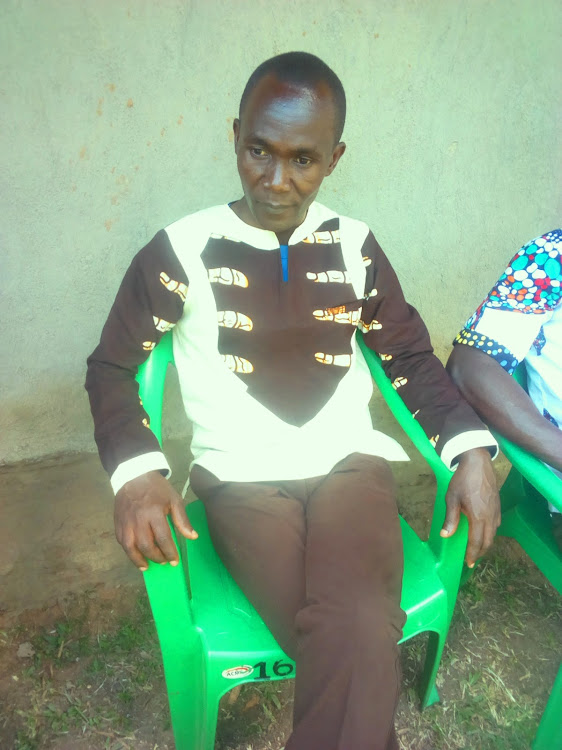 Peter Nanjelo, 45, at home after 20 years in prison due to mistaken identity.
Image: MARTIN OMBIMA

Tears of joy flowed freely as Peter Nanjelo reunited with his family in Vihiga county recently after 20 years in prison on mistaken identity.

The businessman from Emuhaya had been to hell and back after he was wrongly convicted in a robbery with violence case in 2001. It seemed he would never return until his emotional homecoming in the last week of February.

Speaking to Star at the family's home, his son Philip Nanjelo said he had given up on ever seeing his dad again.

“To me, I knew my dad would never come home after being given a death sentence that was later converted to life imprisonment,” Philip said.

His father was arrested on mistaken identity while Philip was four and his sister one year old.

He says life was quite complicated, especially in school, where most of their colleagues had known that their father was an inmate.

"Life in school was never the same. My fellow learners kept mocking me,” he said.

The story of how Peter Nanjelo got to death row in Kamiti Maximum Prison left most residents in shock, not knowing what to do at the time.

“In Execution block, you have nothing left apart from awaiting death,” Philip said.

“And this comes once you have finished all your appeals and the verdict has been made.”

Hezekia Ochuka and company, masterminds of the failed 1982 coup, were the last people executed in Kenya to date.

However, the death penalty remains in place for murder and robbery with violence, leaving convicts in limbo.

No hanging since 1987: Is death penalty still relevant?

FROM SUSPECT TO CONVICT

It all started on December 1, 2001. Nanjelo was arrested in Nakuru town on mistaken identity and held in police custody for 18 days on accusations of robbery with violence.

The father of two had travelled to Nakuru to deliver goods to one of his Asian clients.

However, before travelling, he met his cousin at the bus terminus, who was also heading to Nakuru as well.

They both boarded the Shaggy bus to Nakuru. He had known the cousin for a long time as not a straightforward person.

The time they arrived in Nakuru, with the state of security back then, they were forced to camp in the same place, where Nanjelo used to keep his goods before delivering.

“The following morning, we parted ways as he headed to see his sisters and I went to deliver my leather products,” he said.

After his deliveries, the client urged him to stay put for two more days before he collected the money for his supplies.

"So for the two days, I had to spend at my friend's place, where I used to stay in Nakuru before doing my delivery," he said.

“Now after being told to wait for money, while strolling in town, I bumped into some security officers. What I remember them saying is, ‘Ndio huyu (Here he is),’ which I didn’t understand at all.”

Nanjelo was hand-cuffed and taken to Central police station without knowing the exact crime he had committed.

Nanjelo said one of the officers in the cell misled him by advising him to admit to his crimes.

His cousin was arrested with a gun, handcuffs, phones and watches that he had robbed from different people.

“For me, I had never gotten myself into such a situation. So what the officer told me, I had to comply with it, without knowing that’s how I was digging my own grave,” he said.

“The house where I used to camp with my goods before supplying was cited as a criminal hideout.” 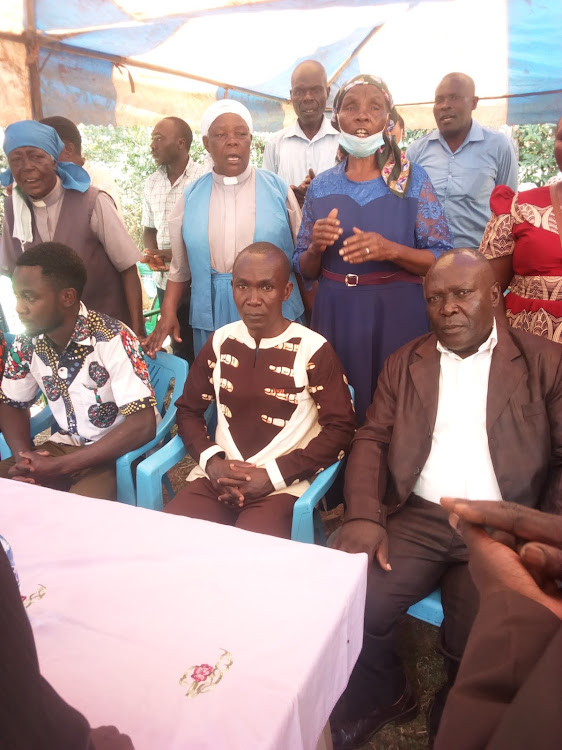 Peter Nanjelo (C) with his son Philip Nanjelo and his father in a brown suit
Image: MARTIN OMBIMA

No one from his family knew what was happening, considering Kenya was not as digital as it is now.

It was an uphill task for his family to trace him as they were looking for him manually.

His father said security agencies in Nakuru kept taking him round in circles while he was looking for his son.

“All of the officers we were asking about Peter Nanjelo never gave us any clear data that could help us reach him,” the father said.

“So we got tired but the good thing was that we had found him in Central police station, facing a robbery with violence case, whose punishment was death.”

Nanjelo says his first judgment came out on February 21, 2003, giving him a death sentence for robbery with violence.

The father of two, who was running a leather workshop in Nairobi, says the case took  one year and three months for him to get the judgment.

“After judgment, I was given only 14 days for the appeal, which was later dismissed by the High Court,” he said.

“So the second chance that was left for me was the Court of Appeal, which took two years while I was still in police custody.”

This appeal was also dismissed, however, leaving Nanjelo with no hopes at all. 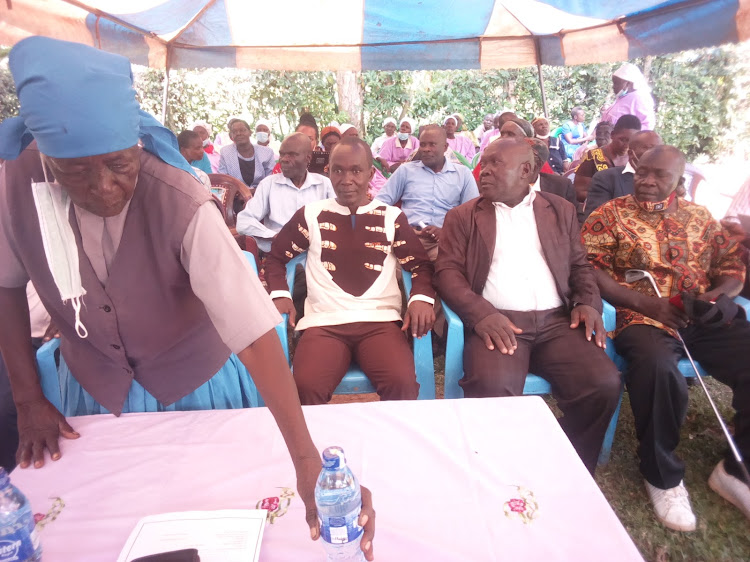 The family of Peter Nanjelo celebrates after receiving their son at home in Es'saba village, Emuhaya subcounty
Image: MARTIN OMBIMA

The most painful part of my life was about my young family which I had left behind. I was the sole breadwinner for them

Nanjelo was later taken to Naivaisha Maximum Prison, currently in Nakuru county, and later moved to the Execution block in Kamiti.

Before the move, he was held at Condemned block while at Naivasha Maximum Prison.

"That was something I wasn't expecting in my life. It came as a shock," he said.

“The most painful part of my life was about my young family, which I had left behind. I was the sole breadwinner for them.”

He felt like their life had come to an end, with his wife having no job to help take care of the young family back then.

Before the promulgation of the 2010 Constitution, it was up to the head of state to review the sentences of Execution block prisoners.

“Prison life was totally hard for me: torture, mistreatment by other prisoners... it needs time for someone to adjust to it,” he said.

The worst part of it was they were denied the freedom to see their families.

“In 2009, President Mwai Kibaki announced that all prisoners on death sentence would serve life in prison,” he said.

This gave hope of life to Nanjelo, but his freedom was still restricted.

Following the pronouncement, he had to figure out something to do while in prison.

Nanjelo went for tailoring after going through a series of guidance and counselling sessions in the prison.

He complied with all demands under his instructors while in prison, which led him to serve as a prison prefect.

The father of two was later transferred to Manyani prison in Nyeri after the Kamiti prison was declared full to capacity.

From Manyani, he was further transferred to Shimo la Tewa prison as the Nyeri prison was already full to capacity, and later to Kodiago prison.

Having exhausted his appeals, the only hope was for Presidential mercy, which entails granting pardon to reformed and rehabilitated convicted criminal offenders deserving early release from prison.

"We filled those forms, but it took a long time," his son Philip said.

He said in 2016, Nanjelo was given a chance to write a petition to then Chief Justice David Maraga, arguing that the death sentence he was given was unconstitutional.

His petition reached the CJ and he was given a chance to appeal.

"This appeal was only specific to the reforms mitigation under the court," Philip said.

While mitigating him, the court found he had reformed and was serving as a prison trustee by then. He had also done a tailoring course.

The court, therefore, decided to release him. He was free at last. He went home to find his wife had long left him and only his children and other relatives were there to welcome him.

He is planning to seek legal action for his wrongful imprisonment after putting his family affairs in order.

Weird and wonderful tales in year of changing fortunes
Post a comment
WATCH: The latest videos from the Star
by MARTIN OMBIMA OmbimaPatrick
Lifestyle
26 March 2021 - 04:00
Read The E-Paper