The commissioner also asked tea farmers not to abandon the sector over the reduced annual bonuses.

•He warned that those incriminated in the thefts during the forthcoming harvesting season will be prosecuted.

•Murang’a County has suffered numerous coffee thefts in the last few years with majority of the cases still pending in courts. 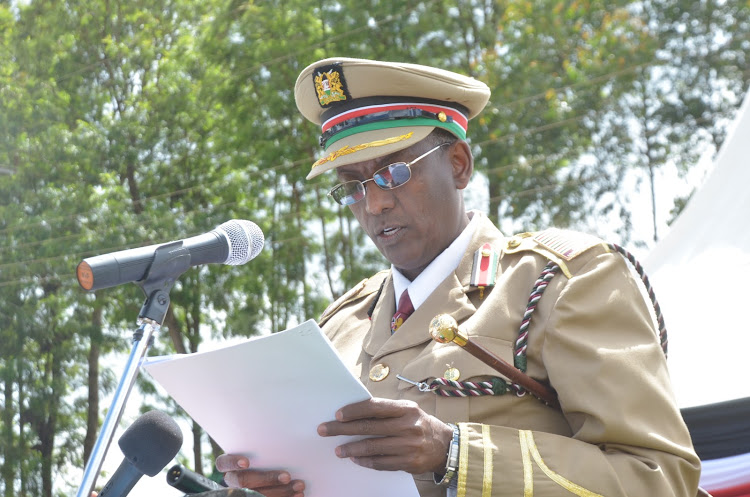 Murang’a County commissioner Mohamed Barre has urged coffee farmers to elect leaders of integrity to manage the operations of their factories.

Barre has said many coffee factory managers collude with thieves to defraud farmers by having their produce stolen while under their custody.

Barre said most of the thefts witnessed in coffee factories are carried out in a similar manner,saying it is orchestrated by officials.

He faulted the managers for keeping the coffee longer than necessary in the factory and wondered how thieves manage to get information on the amount of coffee held by a factory and where it is kept.

“When they hit a factory, it takes them minimal time to break in and load the produce onto lorries,” he said.

Barre, who was speaking during Mashujaa day celebrations in Kangari, Kigumo Sub County, said it is inhuman for the managers to defraud farmers who work hard on their farms in order to support the families but in the end lose all their payments.

He warned the managers to stop perpetuating theft as the harvesting season approaches saying they will be arrested and prosecuted.

The commissioner also cautioned farmers to ensure they consider the integrity of the security guards they employ in factories saying some have also been incriminated in the thefts.

Murang’a County has suffered numerous coffee thefts in the last few years with majority of the cases still pending in courts.

Barre said Kenyan farmers should be the highest paid as local coffee is one of the best worldwide.

With better management, the sector is capable of earning farmers good returns and improving the economy.

Early this month, farmers affiliated to Kariua coffee co-operative society, which serves four factories in Kandara, protested the misappropriation of their money by their co-operative leaders.

The farmers accused the leadership of the co-operative society of paying them meagre prices while misusing their money.

The commissioner also asked tea farmers not to abandon the sector over the reduced annual bonuses.

Barre told farmers that the government is working on ways that will ensure the sector is well managed as it is one of the top foreign exchange earners.

Mwaniki said KTDA should not rely on specific countries to buy tea and should expand its market to cushion the sector from such occurrences.

Senator Irungu Kang’ata said he will push for autonomy of the tea directorate which is under the Agriculture and Food Authority.

Kang’ata said in its current state, the directorate is unable to efficiently handle the issues facing the sector.

Factory paid Sh24 per kilogramme for the coffee sold in the year 2018-19.
News
2 years ago