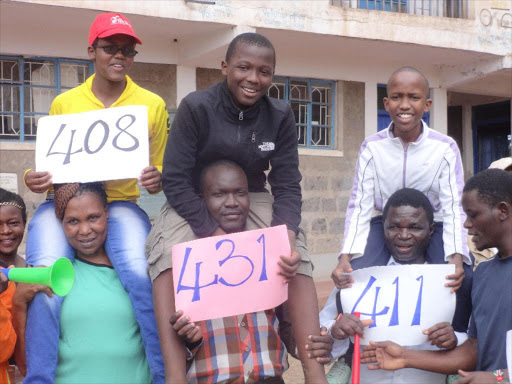 A school situated at the centre of three notorious chang’aa dens in Githurai, Kiambu county, overcame all odds to produce top performers in the KCPE exam released on Monday.

Clanne Academy is situated at a place commonly known as ‘Kona Mbaya’ due to its high crime rates and illicit brew dens.

More than half of the 44 candidates who sat for this year’s KCPE at the school scored over 350 marks.

The school’s head teacher Robert Onyango said that despite the numerous challenges the students faced, they remained focused and disciplined which contributed to their success.

The school’s proprietor Clapaton Maiga said they have raised the issue of uncontrolled chang’aa brewing in the area with the relevant authorities and are hopeful that the authorities will crackdown on the trade.

“There are three dens with idle youth known to be behind criminal activities in this area. We hope that the authorities will act swiftly and wipe them out to ensure security of the area and that of our pupils,” Maiga said.

He said the school had put proper measures to ensure the safety of their pupils including purchasing of buses which transport students to their homes every day.

Among the top performers at the school are Victor Kinyua, Alex Munene and Esther Ndila who scored 431, 411 and 408 marks respectively.

Kinyua said the major challenge they faced in their last year at the school was harassment by idlers at the chang’aa dens as they were going to class.

He said that at times they were robbed of their textbooks by the idlers who later sold them to get cash for their illicit brews.

“Most of them are school dropouts and are always drunk or on drugs. They usually chase us and forcefully take our textbooks probably to go sell them. But despite that we remained focused with our studies and hence our success,” Kinyua said.

Kinyua told the Star that he hopes to join Mang’u High School and later pursue his dream of becoming a doctor.

He attributed his success to God and help from parents and teachers.

Munene said that despite being out of school most of the time due to lack of school fees, he managed to excel in the exams.

He said that he aspires to become a neurosurgeon and is hoping to join Lenana Boys High school.

“I believed that I could also study at home and excel. My mother stays at home while my father doesn’t have a formal job and usually struggled to raise my school fees. But I am sure I’ve made them proud,” Munene said.